Directions (1-5): Study the information and answer the following questions:
Eight family members are sitting in a row, some are facing north while some are facing south direction. There are three generations in the family.
G is grandfather of D and sits fourth to the right of his son. E’s mother sits third to the left of E’s husband. More than three persons sit between G and H. C and G are facing opposite directions. D sits third to the right of her mother. B is son-in-law of A. G does not sit at ends. D is not an immediate neighbour of G. C is father of D and sits second to the left of D. F is sister-in-law of E and sits third to the right of her father-in-law. G’s wife sits second to the right of him and both are facing opposite direction to each other. D and H are cousin, and both are unmarried. A has one son and one daughter. Three persons are sitting in between H and his mother. E sits fourth right of H who is facing opposite direction of E. C’s wife facing south. E is married to B.

Q4. What is the position of H with respect to his aunt?
(a) Immediate left
(b) Fourth to the right
(c) Third to the left
(d) Second to the right
(e) None of these

Q6. Statements: “If you ask me about the daunting challenges that I face, I would say that my government’s first priority is to improve the existing law and order situation. Then follows the issue of prices of commodities.” ___ Mr. ROY, a newly appointed PM of country CLINTON
Assumptions:
I. If a citizen of country CLINTON can sleep peacefully, he/she can then think of providing food to his/her family, ponder over education and move about freely in the country.
II. Prices of the commodities affect the common man greatly.

Q7. Statements: “If you have any unresolved consumer disputes, do not feel that you are helpless, do not hesitate to assert your rights. Approach the District Consumer Forum for speedy redressal.” ____ Department of Consumer Affairs
Assumptions:
I. People don’t want to approach consumer forum due to the red-tapism in procedure adopted by the forum.
II. Speedy redressal will attract more unresolved consumer disputes.

Directions (11-15): Study the following information carefully and answer the given questions.

When a word and number arrangement machine is given an input line of words and numbers, it arranges them following a particular rule. The following is an illustration of Input and rearrangement.

And step 8 is the last step of the above input. As per the rules followed in the above step, find out the appropriate step for the given output. 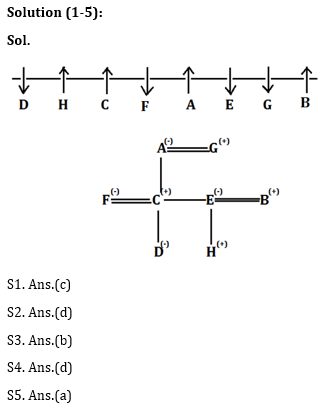 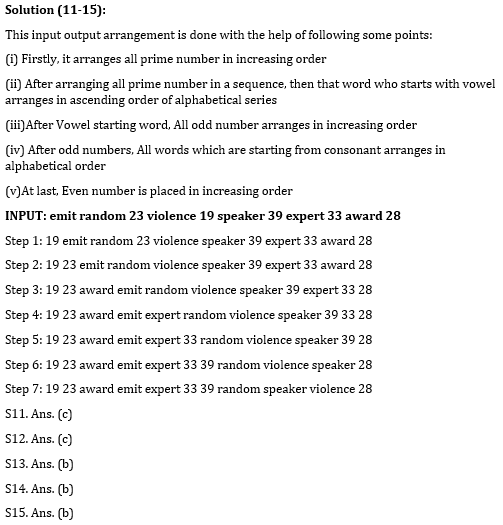