Directions (1-5): Study the information carefully and answer the questions given below.
Eight persons P, Q, R, S, T, U, V and W are sitting around a circular table not necessarily in the same order. All they are like different cars i.e. BMW, Kia, MG, Honda, Tata, Jeep, Datsun and Ford. Some of them are facing towards the center and some of them facing outside from the table. Not more than two persons adjacent to each other facing in the same direction. No two persons sitting adjacent to each other according to alphabetical order. (For ex. P does not sit near to Q, Q does not sit near to P or R and so on.)
Q sits 2nd left of the one who likes Honda. R sits 3rd right of the one who likes Ford. V and T sit opposite to each other and facing in the same direction. One person sits between V and P. U likes Jeep. The one who likes MG sits 2nd right of V. U and P faces opposite direction to each other. S likes Kia but he is not a neighbor of U. R likes Tata and sits opposite to W, who is immediate left of T. U faces towards the Center. W sits 2nd right of the one who likes Datsun. Q and R faces opposite direction to each other.

Q4. What is the position of V with respect to the one who likes Datsun?
(a) third to the left
(b) Fourth to the right
(c) third to right
(d) fifth to the left
(e) None of these

Q7. Statements:
Some sand are Dam.
All Dam are Mall.
All Sand are wood.
Conclusions:
I. At least some wood are Mall
II. Some Dam are wood is a possibility.
III. No Mall is sand.
(a) Only I follow
(b) I and III follow
(c) II and III follow
(d) All follow
(e) None of the above

Q10. Statements:
Only white is Red
Some blue is green
Some white is Blue
Conclusions:
I. No Red is Green
II. Some White can be green 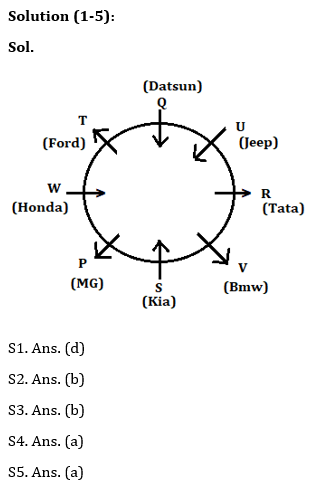 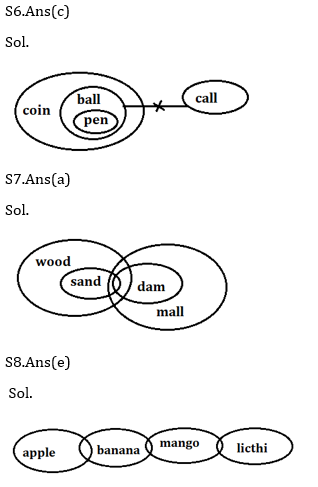 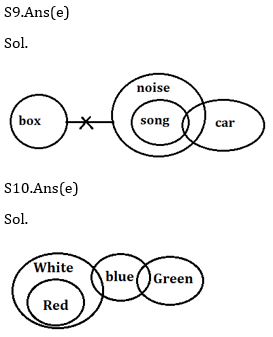