Directions (1-5): Study the following information carefully and answer the given questions:
Eight friends A, B, C, D, T, U, V and W are sitting around a square table in such a way that four of them sit at four corners of the square while the other four sits in the middle of each sides. All of them like different subjects viz. History, Polity, Science, Geography, Reasoning, Aptitude, Physics and Biology. The ones who sit at the four corners faces away from the center while those who sit in the middle of the sides faces inside. C likes Geography and sits third to the right of T. Only two persons sit between T and the one who likes Polity. D likes History and is an immediate neighbor of C. A likes Science. W does not like Polity. B sits second to the right of the one who likes Aptitude. The one who likes Geography faces the one who likes Reasoning. U is not an immediate neighbor of the one who likes Reasoning. U likes Physics. Neither V nor W likes Aptitude.

Q7. Statement: Majority of the students in many schools do not pass in the final examination.
Courses of action
I. These schools should be closed down as these have become unproductive.
II. The teachers of these schools should immediately be retrenched.

Q8. If there is point Y which is 3m west of Point R. Then Y is in which direction from point S?
(a) South-West
(b) North-west
(c) West
(d) Cannot be determine
(e) None of these

Q9. Point R is in which direction with respect to point P?
(a) South-West
(b) North-west
(c) South-East
(d) North-East
(e) None of these 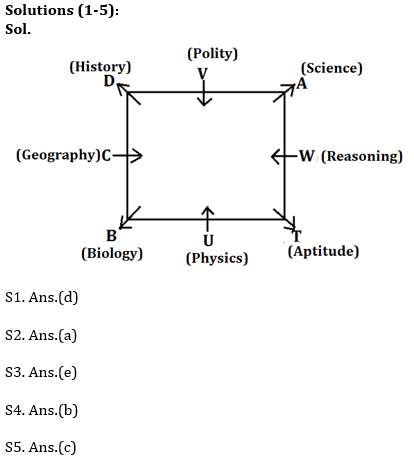 S6. Ans.(e)
Sol. The problem is that despite an increase in staff strength, the Institute has failed in its objective of implementing its plan. So, either there should be reasons for the lackening or the plans are a failure and must be revised for practical implementation.

S7. Ans.(d)
Sol. Clearly, the situation demands that efforts be made to remove the lackenings in the present system of education and adequate measures be taken to improve the performance of students. Harsh measures as those given in I and II, won’t help. So, none of the given courses follow.