Directions (1-5): Study the information carefully and answer the questions given below.
Seven persons J, K, L, M, N, O and P are going for holiday in seven different months of the same year i.e. January, March, April, May, June, July and August but not necessary in same order.
M goes in the month which has even number of days. One person goes between M and P. K goes after M. More than one person go between M and L. O goes just after L. Not more than two person goes between K and P. J does not go in the month which has odd number of day. N does not go in May.

Q6. If all the letters in the word MEMORIZE are arranged in alphabetical order from left to right in such a way that vowels are arranged first followed by consonants, then how many letters are there in between I and R after the arrangement?
(a) Two
(b) None
(c) Three
(d) Five
(e) One

Q7. The position of how many alphabets will remain unchanged if each of the alphabets in the word ‘Firecracker’ is arranged in alphabetical order from left to right?
(a) Four
(b) Three
(c) None
(d) One
(e) Two

Q9. In a certain code, ROOMMATE is written as NPPSFUBN. How is SCRABBLE written in the code?
(a) TDSBCCFM
(b) FMCCBSDT
(c) BSDTFMCC
(d) BSDZFMCC
(e) None of these 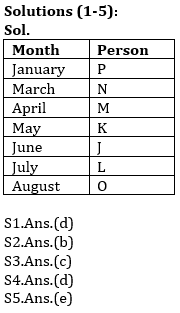 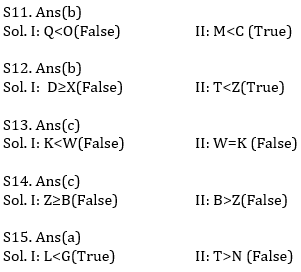