Q3. Which of the following statement is true about W?
(a) W lives on an even numbered floor
(b) Only two persons live between W and V
(c) S lives just below W
(d) More than two floors between U and W
(e) None is true

Q10. Statements:
All Orange are Green.
Some Green is Yellow.
No Yellow is Blue.
Conclusions:
I. All Orange is Blue.
II. All Green is Blue
III. Some Orange is not Blue.
(a) Only I follows
(b) Only II follows
(c) Only III follows `
(d) Either I or III follows
(e) None of these

Directions (13-15): Study the information carefully and answer the questions given below.
Eight students P, Q, R, S, T, U, V and W, appear in an examination in two different shifts either at 10 AM or 3 PM. They give exam on different months of the same year starting from March to June. Only two persons give exam in between W and T, whose exam is in the month which have even number of days. P gives exam in the month having 31 days. S gives exam in evening shift but before W. Three persons give exam between U and R. W gives exam before T. V gives an exam in evening shift of the month which have odd number of days but after W. U gives the exam in the month having 30 days but not in June. Only two persons give exam between P and Q. 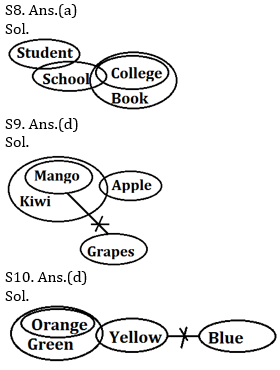 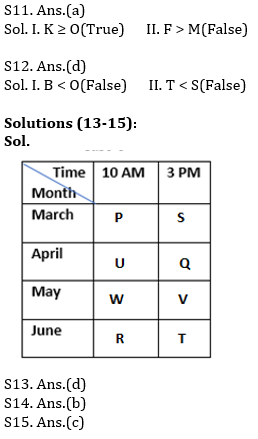