Directions (1-5): Study the following information carefully and answer the given questions.
Eight members of a family are sitting around a square table for diner, in such a way two persons are sitting in each side of the table. There are four couples and three generations in the family. Each person likes different food.
G does not sit opposite to H. C’s son-in-law does not like Pav Bhaji and Pizza. D is son-in-law of E and seated second to the right of G, who is wife of A. D’s brother-in-law likes Momos. The person who likes Dabeli sits second to the right of the person, who likes Kathi Rolls. C is the father of B, who is not the youngest member in the family. H’s grandfather does not like Sandwich. No three females are sitting together. The daughter-in-law of A likes Dabeli. H sits second to the left of F’s father-in-law. Only one couple can sit together. G likes neither Kathi Rolls nor Sandwich. G is the grandmother of H. Daughter-in-law of E and E does not sit together. The one who likes Pasta is immediate neighbour of the one who likes Pizza and the one who is husband of F. The Person who likes Pav Bhaji sits opposite to the one who is immediate right of B’s husband. A is sitting between H’s grandmother and wife of H. The one who likes Burger is immediate neighbor of E.

Direction (9-10): Study the following information carefully and answer the given questions.
There are seven members in a family i.e. A, F, D, B, C, E and G of three generation. There are two married couples. A is only sibling of F. B’s husband has only one child. G is niece of F and D is father of F. C is brother in law of F. F is husband of B.

Directions (11-13): Study the following information carefully and answer the given questions.
Six persons are sitting around a triangular table, three persons are facing inside and sits at middle of triangular side and rest are facing outside the center and sits at corner of the triangular. R sits fourth to the left of P. T sits second to the right of U, who is not an immediate neighbour of R. S sits second to the left of the one who sits third to the right of R. Q does not faces inside.

Q12. What is the position of T with respect to Q?
(a) Third to the left
(b) Immediate left
(c) Second to the right
(d) Immediate right
(e) None of these 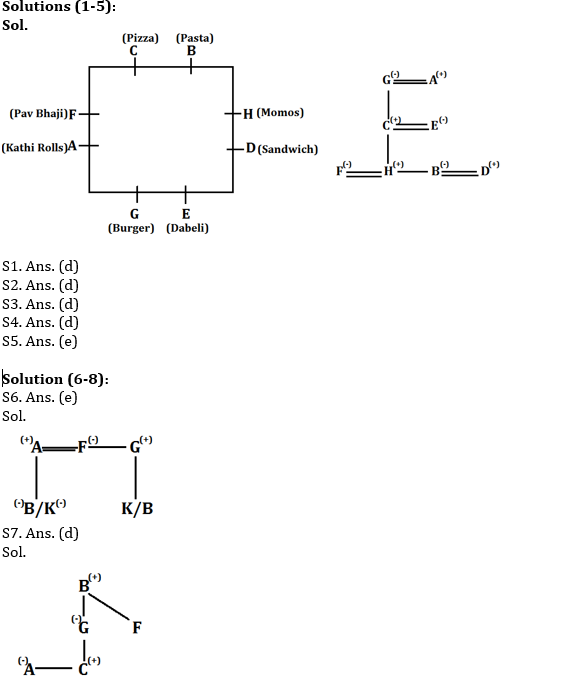 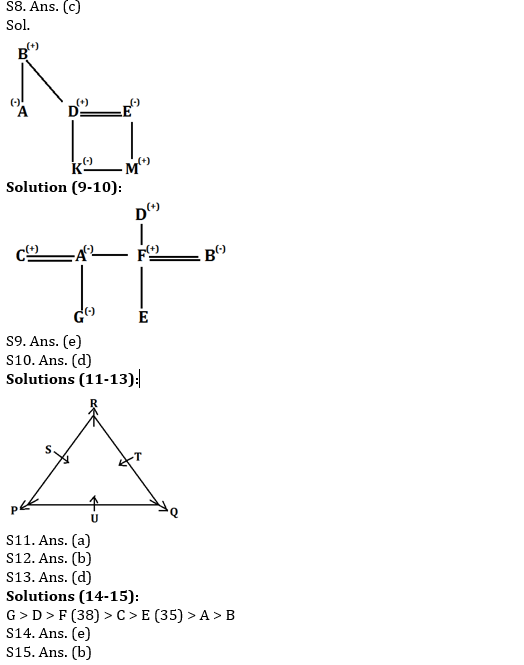