Q10. Six persons are sitting in a row facing north. Who among the following sits immediate left of P?
I. P sits third to the left of R. Only two persons sit between U and T who is not an immediate neighbour of P.
II. P sits second to the right of Q. T sits immediate right of S.

Direction (11-12): Study the following information carefully and answer the given questions:

Q14. What is the direction of point Q with respect to point P?
(a) North-East
(b) South-West
(c) South-East
(d) North-West
(e) None of these

Q15. If Point L is midpoint of O and Q, then what is the direction of point L with respect to point U?
(a) South
(b) South-west
(c) North
(d) South-east
(e) None of these 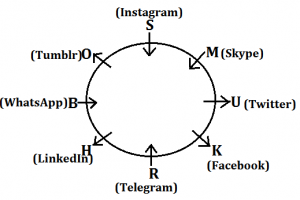 S10. Ans.(e)
Sol. By combining both the statement we can find U sits immediate left of P.

Solutions (11-12):
S11. Ans.(b)
Sol. The government has decided to sell off its industrial units, because heavy loss was caused by corruption, inefficiency and red-tapism. Hence statement II is the cause and I is its effect.
S12. Ans.(e)
Sol. It can’t be a better course of action to convert the Internet Cafe into Coffee Cafe. Also, a new project at the place of internet cafe after diminishing it can’t be a rational course of action. More investment in loss making project is also not rational without a strong strategy, and the 4th statement is illogical – not a good course of action. 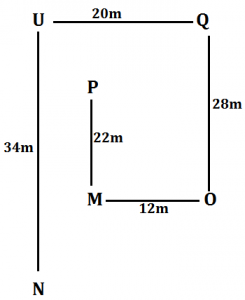