Q2. Tower D is towards East to Tower F. Tower B is towards North of Tower D. Tower H is towards South of Tower B but north of D. Towards which direction is Tower H from Tower F?
(a) East
(b) South-East
(c) North-East
(d) North
(e) Can’t be determine

Q6. In which direction is B standing with respect to F?
(a) North-West
(b) North
(c) North-East
(d) Cannot be determined
(e) None of these

Q10. If point V is somewhere in between point Z and Point O, then what is the position of point V with respect to point Y?
(a) North
(b) South-west
(c) South-east
(d) None-of-these
(e) East

Directions (11-14): Study the information carefully and answer the questions given below.
Ajay starts his journey from point Y and walks 10m and reached at point X. From point X he takes right turn and walks 15m towards east direction and reached to a circle and the circle is in northeast with respect to point Y. when he reached to the circle the Park is located in his Right and Football club is located in his left and home is in straight. Each place is 10m away from the circle.

Q12. Park is in which direction with respect to point X?
(a) South
(b) Southwest
(c) North
(d) Northeast
(e) Southeast 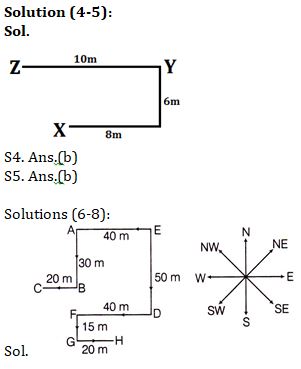 S6. Ans.(b)
Sol. B is standing in North direction with respect to F.

S7. Ans.(d)
As total distance between I and D is not given, so the position of H with respect of I cannot be determined. 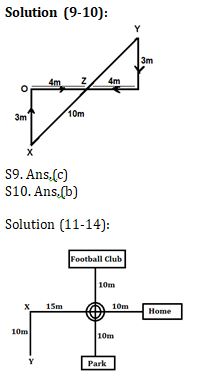