Directions (1-5): Study the following information to answer the given questions:
Eight persons P, Q, R, S, T, U, V and W, are work in three different companies i.e. Hp, Dell and Lenovo. Each of them likes different Mobiles i.e. Apple, Mi, Oppo, HTC, Vivo, Samsung, Nokia and Sony but not necessarily in the same order. Not more than three persons work in same company.
The persons who work in Dell do not like Samsung and Oppo. R likes Vivo and work in Hp. U likes Nokia and works in Lenovo. W and V works in same company. P does not works in the same company in which W and R work. S likes Samsung. W and T do not like MI. V does not like HTC and MI. The one who likes Mi work in Dell. The one who likes Sony works in same company with only one person who likes Nokia.

Q6. Statements:
Some Reference is Review
Some Review are leader
Only a few leader are money
Conclusions:
I: All leader can be money
II: Some Review are Money is possibility

Q7. Statements:
No Ram is rom
All Ram is Mango
All Rom is apple
Conclusions:
I. Some Mango are not Apple
II. Some apple are not Mango

Q8. Statements:
Only a few circle are triangle
No triangle are Square
Some Square is Hexagonal
Conclusions:
I: All circle can be triangle
II: Some square are circle

Q9. Statements:
All Bank are Court
All Court are Legal
Some legal are Eagle
Conclusions:
I. Some Bank are Legal
II. Some Eagle are Court

Q10. Statements:
All coal are petrol
Some petrol are Diesel
All Diesel are Bike
Conclusions:
I. Some Petrol are not Bike
II. All Petrol are Bike 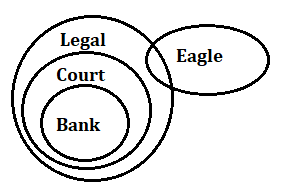 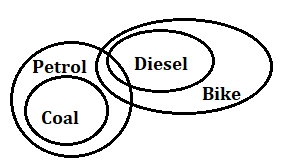