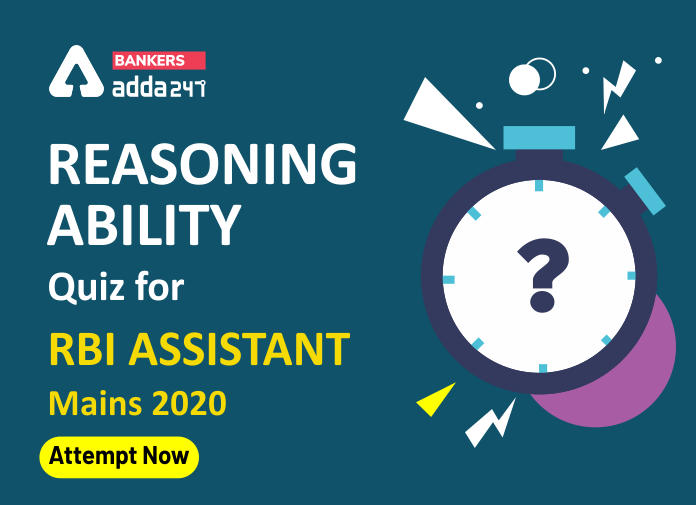 The Reasoning Section is one of the scoring sections of the bank examination. If you clear your basics and practice more and more quizzes and also follow a proper study plan, you can easily crack the exam. RBI Assistant Exam is one of the most prestigious exams in the Banking Sector. 13th May 2020 RBI Assistant Mains Quiz Based on- Puzzle, Coding-Decoding, Blood Relation.

Directions (1-5): Study the following information carefully and answer the questions following it.
Six family members U, V, W, X, Y and Z performed six classical dances from Monday to Sunday at Nirman Vihar, but not necessarily in the same order. Each person performed different classical dance i.e. Bharatanatyam, Kathakali, Kathak, Kuchipudi, Odissi, Mohiniyattam on each different day but one day was rest day(which means no dance performed on that day). Neither Sunday nor Monday was rest day.
Kathak was performed after Bharatanatyam but not immediately after Bharatanatyam. Kuchipudi was performed just before Odissi. All Six dances were performed in last week of August month. X’s father performed dance before Sunday. Kathakali was performed on 26th August and Mohiniyattam was performed on 31 August. Y’s grandfather is a brother of V. U have two sons. Dances were organized in such a way that three dances were performed in continuous way means there was no leave day between three dances. Leave day(rest day) came just after or just before of three set of dances. X’s father is a brother of Y’s father. W, who is uncle of X performed dance on 30th August. V performed dance immediately before U. Y’s cousin performed dance on Wednesday. One of them performed on 29th August.

Q1. In which of the following days, Y performed dance?
(a) Monday
(b) Wednesday
(c) Saturday
(d) Sunday
(e) Thursday

Q4. Four of the following five are alike in a certain way and hence they form a group. Which one of the following does not belong to that group?
(a) Sunday
(b) Wednesday
(c) Thursday
(d) Friday
(e) Monday

Q5. If all family members are arranged in alphabetical order from Monday to Sunday. Which of the following friend performed dance on 29th August?
(a) U
(b) X
(c) V
(d) W
(e) Z