SBI has announced recruitment for Clerical Cadre 2020. With SBI Clerk Prelims 2020, students have an opportunity that should not be missed at any cost. Get a job of your dream with  English Language  SBI Clerk English Daily Mock 12th February 2020. It will help you achieve your goal if practiced with dedication. The quiz contains a Fillers Based Practice Set. Stay with Bankers Adda for the latest Quizzes, Study notes, Test series, and other helpful study material.

Directions (6-10): There are two different sentences with a blank space in each sentence. Choose the word from the given options which fits appropriately in both the blanks adding a proper and logical meaning to the sentences.

Directions (11-15): In each of the following questions, a sentence is given with a blank. There are five words given below each sentence. Choose the phrases among the five options that suitably fit the given blank. If no word fits the blank then choose option (e), i.e. ‘None of these’ as your option.

Q11. The SIS called on the foreign media to _______________the professional codes and report only what they witness themselves, checking facts from their authentic and reliable sources.
(a) Abide by
(b) Ask around
(c) Back up
(d) Back off
(e) None of these

S1. Ans. (c)
Sol. Among the given options, option (c) provides the best alternatives to the blank and is the correct answer.

S2. Ans. (d)
Sol. The option which provides correct and relevant alternatives to the blank is the option (d).

S4. Ans. (a)
Sol. The correct option which imparts correct and relevant words to the blanks is the option (a).
Hence, option (a) is the correct answer.

S5. Ans. (e)
Sol. The phrase ‘reducing dependence on imported fossil fuel…’ suggests that the proposal was approved. For the second blank, the appropriate words are ‘carrier’ and ‘railways’.
From above, it can be derived that the correct answer is option (e).

S8. Ans. (b)
Sol. Among the given options, ‘cheaper’ travel on local buses is the most relevant option and is the correct answer.
The options (a), (c), (d) and (e) are completely irrelevant.
Hence, the correct answer is the option (b).

S9. Ans. (d)
Sol. Among the given options, only option (d) ‘confirmed’ is the most appropriate choice and the correct answer.
The options (a), (b), (c) and (e) are completely irrelevant as per the context of the sentence.

S10. Ans. (e)
Sol. Among the given options, the option (e) ‘disappoint’ is the most relevant word to fill the blank.
Hence, the correct answer is the option (e).

S12. Ans. (b)
Sol. ‘Back Away’ means ‘to move backward away from something or someone, usually, because you are frightened’.

S13. Ans. (c)
Sol. ‘Block off’ means ‘to cover or close something completely so that nothing can move through it’ or ‘to completely stop something from happening or progressing’. 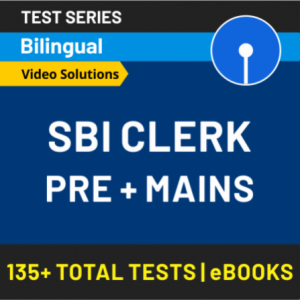 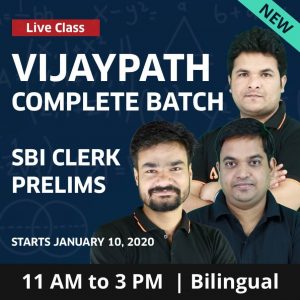 All the Best BA’ians for SBI Clerk Prelims 2020