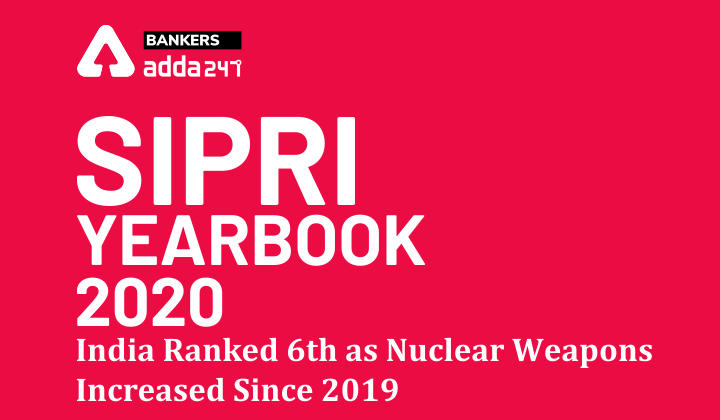 The Stockholm International Peace Research Institute (SIPRI) has launched SIPRI Yearbook 2020. This Yearbook assesses the current state of armaments, disarmament and international security. The 51st edition of the Yearbook reveals an unbroken deterioration within the conditions for international stability.

In accordance with the “SIPRI Yearbook 2020-Armaments, Disarmament and International Security” from 2019 there’s a rise within the nuclear weapons stockpile of India and China. However India’s overall possession of nuclear weapons is a smaller amount than half Beijing’s and also slightly less than what Pakistan possesses.

The nine nuclear-armed states: US, Russia, UK, France, China, India, Pakistan, Israel and therefore the Democratic People’s Republic of Korea (North Korea)—together possessed an estimated 13 400 nuclear weapons at the start of 2020. This marked a decrease from the 13 865 nuclear weapons that SIPRI estimated these states possessed at the start of 2019 (see table below). Around 3720 of the nuclear weapons are currently deployed with operational forces and nearly 1800 of those are kept during a state of high operational alert.

Russia and the USA have extensive and expensive programmes underway to exchange and modernise their nuclear warheads, missile and aircraft delivery systems, and weapon of mass destruction production facilities. Both countries have also given new or expanded roles to nuclear weapons in their military plans and doctrines, which marks a big reversal of the post-cold war trend towards the gradual marginalization of nuclear weapons.

Low levels of transparency in reporting on nuclear weapon capabilities

The availability of reliable information on the status of the nuclear arsenals and capabilities of the nuclear-armed states varies considerably. The governments of India and Pakistan make statements about a number of their missile tests but provide little information about the status or size of their arsenals. North Korea has acknowledged conducting weapon of mass destruction and missile tests but provides no information about its weapon of mass destruction capabilities.

Israel features a long-standing policy of not commenting on its nuclear arsenal. The UK and France have also declared some information. Russia doesn’t make publicly available an in depth breakdown of its forces counted under New START, albeit it shares this information with the USA.

Following table shows the number of warheads of top rankers (as of January 2020):