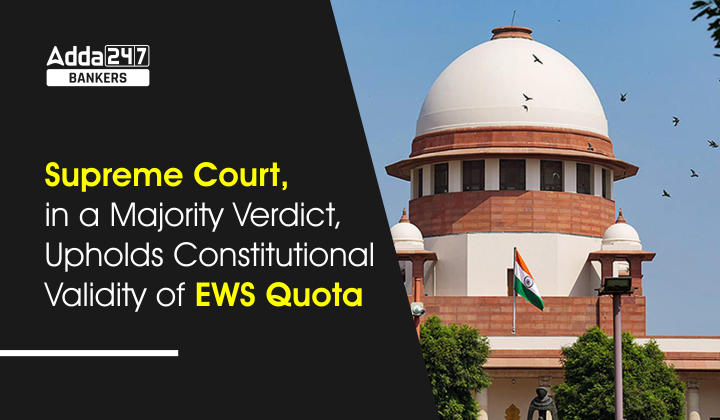 Supreme Court, in a majority verdict, upholds constitutional validity of EWS quota: The Supreme Court’s Constitution Bench upheld the validity of the 103rd Constitutional Amendment, which provides 10% reservation in government jobs and educational institutions to the “economically weaker sections of society” but excludes the “poorest of poor” from its scope among Scheduled Castes (SC), Scheduled Tribes (ST), Socially and Educationally Backward Classes (SEBC), and Other Backward Classes (OBC). Beneficiaries can use the quota to gain admission to government, private, unaided institutions, and government jobs.

What is the 103rd Amendment?

Who is eligible for EWS quota benefits?

What is reservation? Does it violate our Constitution?

Reservation is a tool used by the state to ensure an all-inclusive march toward the goals of an egalitarian society while combating inequalities; it is an instrument not only for the inclusion of socially and educationally backward classes into the mainstream of society, but also for the inclusion of any class or section so disadvantaged as to fit the description of a weaker section. In this context, reservation based solely on economic grounds does not violate any essential feature of the Indian Constitution and does not harm the basic structure of the Indian Constitution.