We are providing you with the test of the day which will help you in upcoming exams like SBI PO Mains, BOB PO 2018. From this, you can practice questions with the timer that will help you to improve speed. SBI PO Mains, SBI Clerk Mains and BOB PO 2018 is one of the biggest opportunity for you guys to grab on, set you own mark and proceed with full confidence. All the very best for your preparations and All the future exams.

and Step V is the last step of the rearrangement of the above input. As per the rules followed in the above steps, find out in each of the following questions the appropriate step for the given input. Input for the questions
Input: why 16 29 not 47 tall 58 violet orange 91 32 small 67 51 boy you

Q1. Which of the following would be the final arrangement?

Q2. In step III, which of the following element would be at 6th position from the left?

91
58
small
tall
None of these
Solution:
tall

Q3. In step V, which of the following words would be at 6th position to the right of 8th from the left element?

small
orange
not
boy
you

Q5. Which of the following is last but one step?

V
VII
VIII
VI
None of these
Solution:
VI

Q6. NITI Aayog and ___________ have signed a Statement of Intent (SOI) to work together towards implementing a Proof-of-Concept (“PoC”) application using Blockchain Technology for fertilizer subsidy management.

Q7. Which of the following cannot be called as a debt instrument as referred in financial transactions?

Certificate of deposits
Bonds
Stocks
Commercial papers
Loans
Solution:
A debt instrument is a paper or electronic obligation that enables the issuing party to raise funds by promising to repay a lender in accordance with terms of a contract. Types of debt instruments include notes, bonds, debentures, certificates, mortgages, leases or other agreements between a lender and a borrower.

Sensex
footsie
nifty
bullish
None of the given options is true
Solution:
The Financial Times Stock Exchange 100 Index, also called the FTSE 100 Index, FTSE 100, FTSE, or, informally, the "Footsie", is a share index of the 100 companies listed on the London Stock Exchange with the highest market capitalization.

Q10. Bagalkot is a city in Karnataka state of India and it is situated on river?

Musi
Ghataprabha
Kaveri
Girna
None of these
Solution:
Bagalkot is a city in Karnataka state of India, which is also the headquarters of Bagalkote district. it is situated on branch of River Ghataprabha about 530 km northwest of state capital Bangalore.

Q11. Rama’s expenditure and savings are in the ratio 5 : 3. If her income increases by 12% and expenditure by 15%, then by how much percent do her savings increase? 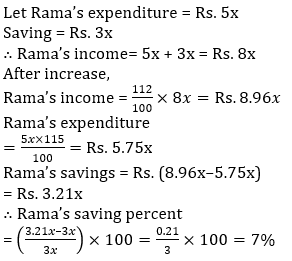 Q15. A certain sum of money was invested at a certain rate of simple interest for 6 years, had it been invested at 3% higher rate, it would have yielded Rs.810 more. What was the principle that was invested?

Directions (16-20): In the passage given below there are blanks which are to be filled with the options given below. Find out the appropriate word in each case which can most suitably complete the sentence without altering the meaning of the statement.

The “audacity of hope” for a country of a billion (16)............ is yet to bear result. The new wave of a technological revolution will not be from pure data or access to consumer behavior. The application of data and their (17)............. with solving social problems, (18)............. better governance and powering elected governments to serve their citizens better is ushering in a new revolution. When Artificial Intelligence is (19)............. with open data, a real paradigm shift begins. With choice and information-sharing now redefining consumer behavior, every company is looking to (20)............. or at least look like it is embracing the new paradigm of data-driven innovation.