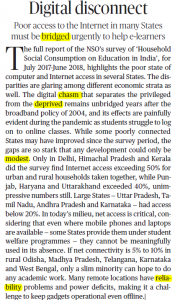 Bridged (verb) पुल बांधना
Meaning:- be or make a bridge over (something).
Synonyms:- link, overpass
Example:- The bridge was tremulous beneath me, and marked the tremor of the solid earth.

Modest (adjective) मामूली
Meaning:- unassuming in the estimation of one’s abilities or achievements.
Synonyms:- humble, moderate
Antonyms:- brave, complex
Example:- Tell you what the trouble is with you, old man: you’re too modest.

Reliability (noun) विश्वसनीयता
Meaning:- the quality of being trustworthy or of performing consistently well.
Synonyms:- accuracy, authenticity
Antonyms:- danger, falsehood
Example:- Next in line of hardiness and reliability is the Weschcke hickory. 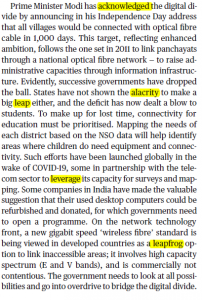 Acknowledged (adjective)
Meaning:- recognized as being good or important.
Synonyms:- accepted, approved
Example:- You have acknowledged, that he has nothing to boast of from them.

Leap (verb) छलांग
Meaning:- jump or spring a long way, to a great height, or with great force.
Synonyms:- surge, upsurge
Example:- He had but to say to me, ‘Leap into the water,’ and I would not have stopped to pull off my coat.

Leverage (noun) उत्तोलन
Meaning:- the exertion of force by means of a lever.
Synonyms:- advantage, clout
Antonyms:- weakness
Example:- If it is too high, it gives the wind a very dangerous degree of leverage.

Leapfrog (noun)
Meaning:- a game in which players in turn vault with parted legs over others who are bending down.
Synonyms:- bounce, dive
Antonyms:- ascent, increase
Example:- Leapfrog is one of his methods of getting over the ground quickly.