The Hindu Editorial Article of 23 September 2020 – A New World Order. 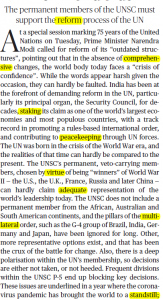 Reform (verb) सुधार
Meaning:- make changes in (something, especially an institution or practice) in order to improve it.

Comprehensive (adjective) व्यापक
Meaning:- including or dealing with all or nearly all elements or aspects of something.

Staking (verb) जताया
Meaning:- support (a plant) with a stake or stakes.

Peacekeeping (noun) शांति स्थापना
Meaning:- the active maintenance of a truce between nations or communities, especially by an international military force.

Multilateral (adjective) बहुपक्षीय
Meaning:- agreed upon or participated in by three or more parties, especially the governments of different countries.

Standstill (noun) ठहराव
Meaning:- a situation or condition in which there is no movement or activity at all. 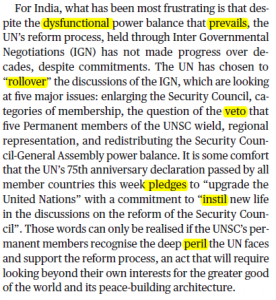 Rollover (noun) उलटना
Meaning:- the extension or transfer of a debt or other financial arrangement.

Veto (noun) निषेधाधिकार
Meaning:- a constitutional right to reject a decision or proposal made by a lawmaking body.

Instill (verb) टपकाना
Meaning:- gradually but firmly establish (an idea or attitude) in a person’s mind.