The Hindu Editorial Vocabulary of 24 September- A Light Touch 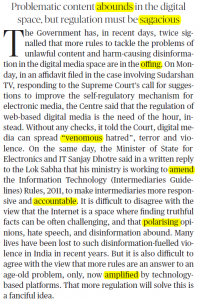 Sagacious (adjective) मेधावी
Meaning:-having or showing keen mental discernment and good judgment; wise or shrewd.
Synonyms:- wise, clever
Antonyms:- stupid, foolish
Example:- The army had appeared a hard master when it ent its strength to a wise and sagacious rule.

Offing (verb) किनारा
Meaning:- the more distant part of the sea in view.

Venomous (adjective) विषैला
Meaning:-(of a person or their behaviour) full of malice or spite.
Synonyms:- poisonous, toxic
Antonyms:- harmless
Example:- Most of these are venomous, but all are not equally dreaded.

Amend (verb) संशोधन
Meaning:- make minor changes to (a text, piece of legislation, etc.) in order to make it fairer or more accurate, or to reflect changing circumstances.
Synonyms:- revise, alter
Example:- The country’s constitution was amended to allow women to vote.

Polarising (verb) फूट डालना
Meaning:- restrict the vibrations of (a transverse wave, especially light) wholly or partially to one direction.
Example:- The issue of computers for young children is particularly polarizing 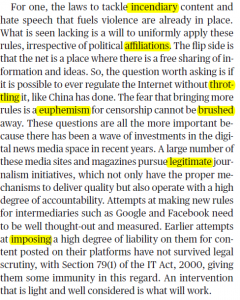 Throttling (verb) गला घोंटना
Meaning:-attack or kill (someone) by choking or strangling them.
Synonyms:- choke, strangle
Example:- Throttling enforces a maximum number of times a function can be called over time

Euphemism (noun) व्यंजना
Meaning:- a mild or indirect word or expression substituted for one considered to be too harsh or blunt when referring to something unpleasant or embarrassing.
Synonyms:- substitute
Antonyms:- dysphemism
Example:- It was a euphemism for ignorance

Brushed away (Phrasal verb)
Meaning:- to refuse to accept or listen to something that someone says
Example:- She brushes this criticism away.

Legitimate (adjective) वैध
Meaning:- conforming to the law or to rules.
Synonyms:- legal
Antonyms:- illegal
Example:- It is a legitimate question that deserves a carefully reasoned answer