Skip to content
Latest Banking jobs   »   What is the concept of bad... 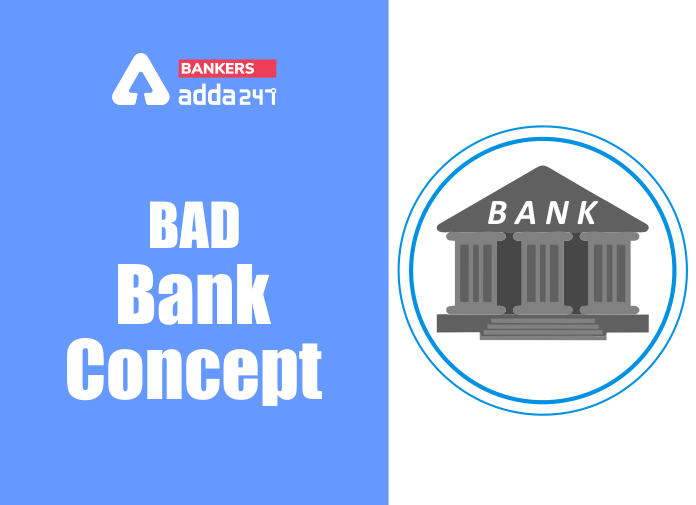 Bad Bank Concept: The current situation of the pandemic has not just hit the world in terms of health. To fight against the spread of the infection, most of the countries have laid down the concept of social distancing and lockdown of the countries. This has led to the closing down of different offices, factories, and many huge industries that were responsible for offering livelihood to many individuals. This has impacted the economic condition of many of the nations such as India.

There are different methods that are being tried out lately in the country that can help in easing up the financial pressure that is emerging. One of the methods that many of the financial experts have been talking about is that of the bad bank concept.

What is the Bad Bank Concept?

Bad Bank concept can be quite confusing for many people as it is not a common thing to be used in everyday life. It is mainly used typically during a situation of financial crisis such as now.

Many of the people may get confused with the name and may think it to be something related to a corrupt bank or so. But it has nothing to do with any corruption or wickedness. The concept is quite simple and justifiable to help many of the financial institutions to manage its financial conditions at times of crisis.

The term was first coined in the year 1980 and Mellon Bank made use of this concept in the year 1988 to deal with the financial crisis that it was dealing in.

Financial institutions such as banks lend loans to different individuals and organizations for various purposes. But there are a number of times when the individuals and eh organizations may not return the loan amount and this keeps on accumulating along with the interested levied on them. If the number of people not paying the loan is higher, this can lead the bank to suffer a bad position and financial issue.

In such a situation, the bad loan can be transferred or rather sold to another separate institute tagged as a bad bank in return for a security receipt. When such a thing is done, the bank keeps its books clear and slowly repairs its financial gaps later.

The Need for Bad Bank

Currently, many of the financial experts in India are saying that it is the perfect time when the bad bank concept can be used to deal with the current situation.

Bad bank is normally used when everything else fails and it is the last resort to be tried out. At present, there are a number of organizations that are not able to pay the loan amount installments to the banks on time as there is no business available in the current market. Also, there have been a number of people too who are not being able to make payments for the loans taken, and hence the banks are under massive financial pressure.

It is still not sure when the pandemic situation will come to an end and when the economic condition of the country will improve. In such a situation, it is quite impossible to track a timeline from when the individuals and organizations will be able to start paying the installments of their loans.

In India too, a model named Project Sasakht has been proposed about which a discussion was also done 2 years ago. The chairman of Punjab National Bank was the first person who proposed this idea in India in the year 2018. Different banks are now looking forward to this model and it may take about 6 months’ time to get approval from the Government of India.

If the proposal is accepted, the AMC will be taken care of by individual professionals who will be buying the assets after selecting the right one for them.

Just starting a bank to support the financial institutions in this situation of the financial crisis is not a simple task. It needs a lot of planning and execution of these plans in the right way. Though the idea of implementing the bad bank concept in India is catching up the fire, it is still not known how much time it may take and what are the steps and recommendations that the Government along with RBI and other bodies is going to make.