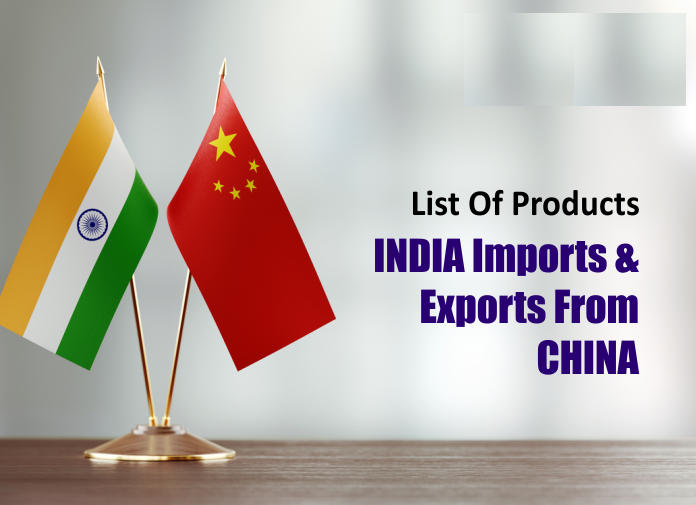 List of items India exports and imports from China: In the current situation of conflict at the India-China border, Indians are showing up anguish in a number of ways. Some people are promoting awareness to stop using Chinese applications while some others are spreading messages of not using Chinese products. But will that really be helpful in stopping the aggression that is going on at the border over the Ladakh land?

Well, this matter is totally political, and hence understanding it can be quite confusing and complicated. The export and import of goods between countries happen to help in maintaining a proper relationship. But recently, it seems that China is having some other thought process against India.

Meanwhile, it will be quite interesting to see the list of items that India exports and imports from China.

Items that India imports from China

Apart from the electrical devices and equipment, another major category that India imports from China are that of nuclear reactors, appliances, and similar other products. In the year 2018-2019, India imported such commodities worth Rs. 93.6 thousand crores from China.

Some other commodities that are imported to India from China are plastic articles, fertilizers, iron and steel articles, optical items, and vehicle products such as useful for the railways.

Among the various items, there has been noticed a decline in the import of iron and steel from China over the last few years. But on the other hand, the amount of other commodities being imported from China by India has consistently increased over time.

Items that India exports to China

Though India imports a large number of items from China, there are also a number of items that India exports to China. Even it can be said that the export trade from India to China has seen a huge increase for the last few years. During 2013-2014, India exported items of Rs. 90.6 thousand crores to China that increased to Rs. 1.173 lakh crores during the tenure of 2018-2019. The increase in export from India to China has been in terms of different commodities such as tea, coffee, aquatic invertebrates, organic chemicals, and many others.

Apart from this, the list of things that China imports from India is huge such as copper, granite, ferro-alloys, coconuts, cashew nuts, leather, telephone sets, and vegetable fats.

India has a strong trade relationship with China both in terms of export as well as import. In the current situation, a lot of people in India are promoting the option of banning or boycotting Chinese items. But everything has its pros and cons. It is true that boycotting some of the Chinese items may lead to the production of those items in India. But on the other hand, it is not possible to do the same for all the commodities.

Before taking a hasty decision of banning the import of particular items from China or any other country, it is much needed to find out a secondary source from where the items can be derived. Similarly, if India has to put a ban on the items being imported from China, it will be much needed to find out some other country from where these items can be imported at a reasonable cost.

Also, banning a country for trade can no doubt lead to further conflicts and this may arise further issues and a war-like situation ahead.