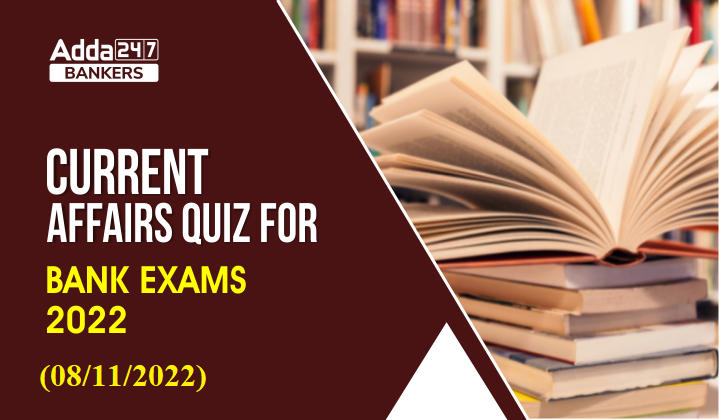 Q1. The Unique Identification Authority of India (UIDAI) has launched a new AI/ML-based chatbot for better resident experience. What is the name of the chatbot?
(a) My Aadhaar
(b) Aadhaar Mitra
(c) Aadhaar Chatbot
(d) Aapna Aadhaar
(e) Unique Aadhaar

Q5. International Day for Preventing the Exploitation of the Environment in War and Armed Conflict is observed every year on which day?
(a) November 2nd
(b) November 3rd
(c) November 4th
(d) November 5th
(e) November 6th

Q7. Haryana State Government’s Forest Department has joined with which organisation to launch the “Trees Outside Forests in India (TOFI)” program in the state?
(a) USAID
(b) UNESCO
(c) FAO
(d) IMO
(e) UNEP

Q9. What is the theme of World Travel Market (WTM) for the year 2022?
(a) The Future of Tourism is Here
(b) Rethinking Tourism
(c) The Future of Travel Starts Now
(d) Travel and Rural Development
(e) Tourism and Jobs: A better Future for All

Q13. Where is the city of Mahakal will soon boast the world’s first Vedic clock which will be synced with the position of the Sun?
(a) Ujjain
(b) Puri
(c) Bhopal
(d) Indore
(e) Nasik

S3. Ans.(e)
Sol. Reliance Industries (RIL) has appointed K V Kamath as the Independent Director of the company for a period of 5 years.

S5. Ans.(e)
Sol. On November 6th, the UN observes the International Day for Preventing the Exploitation of the Environment in War and Armed Conflict.

S6. Ans.(d)
Sol. National Cancer Awareness Day 2022 is celebrated every year on 7th November in India. This day is important because it educates people about the serious risk of cancer.

S7. Ans.(a)
Sol. Haryana State Government’s Forest Department and the US Agency for International Development (USAID) announced the launch of the “Trees Outside Forests in India (TOFI)” program in the state.

S9. Ans.(c)
Sol. The Ministry of Tourism will participate in the World Travel Market (WTM) which is being held in London from the 7th to the 9th of November. The theme of this year’s exhibition is -The Future of Travel Starts Now.

S10. Ans.(a)
Sol. The country’s first voter 106-year-old Master Shyam Saran Negi passed away recently. He was a resident of Kalpa in the Kinnaur district of Himachal Pradesh.

S11. Ans.(c)
Sol. Guyana President Dr. Mohamed Irfaan Ali to be chief guest at 17th Pravasi Bharatiya Divas Convention. Pravasi Bharatiya Divas is celebrated once in every two years to strengthen the engagement of the overseas Indian community with the Government of India. It will be held from 8th to 10th January next year in Indore, Madhya Pradesh.

S12. Ans.(d)
Sol. The Bank’s quarterly profit is 74 per cent higher than the 7,627 crore rupees reported in the year-ago period. The asset quality of the bank also improved with Gross NPAs declining to 3.5 per cent this quarter.

S13. Ans.(a)
Sol. Madhya Pradesh’s Ujjain, the city of Mahakal will soon boast the world’s first Vedic clock which will be synced with the position of the Sun.