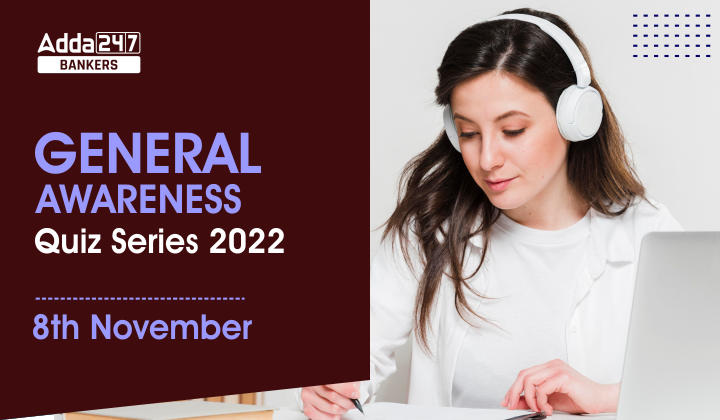 General Awareness Quiz Series 2022: 8th November: Hello Students, General Awareness is an essential part of all government exams. It’s better to prepare this section daily and revise the same using the factsheet provided. Bankersadda team has brought you up a new series in which we will come up with 10 questions and answers, other options of the question have related news to them. So don’t miss reading the solutions.

Q1. RDO has launched Hull Module of Submersible Platform for Acoustic Characterization & Evaluation (SPACE) facility to give impetus to Make in India commitment. It is located at which city?

Q3. A dance event was organized in the memory of Rajaram Mohan Roy on its __ birth anniversary at Kartavya Path and India Gate (Central Vista)

Which of the following statements is / are correct

Q5. The Ministry of Education to celebrate ‘Janjatiya Gaurav Diwas’ in a grand manner in the schools and higher educational institutions across the country to commemorate the birth anniversary of which of the following personalities?

Q6.What is the name of the Chatbot launched by UIDAI?

Q7. Which city will get the world’s first vedic clock?

Q8. The chief guest of 17th Pravasi Bhartiya Divas Convention is Rr Mohamed Irfaan Ali, who is president of _______ country

Q9. Who has been appointed as the chairman of National Monument Authority?

Speaking on the occasion Shri Mayank Agarwal, CEO, Prasar Bharati said that “AIR adopts integrated system for better services. BATS can bring about transparency into the entire operations and make the entire commercial operations very efficient. It allows monitoring of booking, billing and payment receipts etc. at various stages and system can provide various reports which are very essential in taking many management decisions. App is also available on mobile. Software is menu driven enterprise which has been customized to the need of All India Radio making it more handy and useful.”

A one-year long celebration was launched by the Ministry of Culture, Government of India on May 22, 2022, on the occasion of the 250th birth anniversary of Raja Rammohun Roy, as part of the Azadi ka Amrit Mahotsav.

15th November is the birth anniversary of Birsa Munda who is revered as Bhagwan by tribal communities across the country. Birsa Munda was an iconic freedom fighter, social reformer and revered tribal leader of the country, who fought bravely against the exploitative system of the British colonial government, and became a legendary figure in his lifetime, often referred to as ‘Bhagwan’. He organized and led the tribal movement, giving a call for “Ulgulan” (Revolt) to the tribals. He encouraged tribals to understand their cultural roots and observe unity.

Aadhaar Mitra: The Unique Identification Authority of India (UIDAI) presented the brand-new AI/ML chatbot Aadhaar Mitra in order to facilitate citizens’ usage of the services. Both Hindi and English are available for the chatbot. For the purpose of teaching viewers, it also offers the option of viewing related videos on specific themes.

Madhya Pradesh’s Ujjain, the city of Mahakal will soon boast the world’s first Vedic clock which will be synced with the position of the Sun. After laying the foundation stone at the 300-year-old Jiwaji Observatory in Ujjain

Professor Kishor Kumar Basa has been appointed as the chairman of the National Monument Authority (NMA).