As compared to other countries, the growth rate of COVID-19 in India is less, and it has declined by 40% in the last week. As told by the government, the cases of COVID-19 positive have fallen within three after 6.2 days of the lockdown. The central government said that maintaining a social distance between people has helped to reduce the counting.

Decline in rate of growth of COVID-19 Cases in India

The Union Health Ministry on Saturday revealed that the growth rate of corona positive people from March 13 to 15 was 2.1, and by April, it fell by 1.2. Thus there is a total of 40% decline in the COVID-19 positive cases. The rate of positive cases was doubled in 3 days, but now the rate of growth has been doubled in 6.2 days. According to the Health Ministry, the rate of cases being doubled is, even more, slower than the states. The government has been trying maximum to take action on the hotspot areas to capture the transmission rate of the pandemic disease.

Also, the joint secretary Lav Aggarwal, in his statement, concludes that the ratio for deaths and recovery due to the pandemic is 20:80. This result is better than in other countries. Thus with the rise in recovery rate, more patients have won the battle fighting against disease. Friday recovery rate was 13.06%, and the reduction in growth has been significant enough. Now the government is planning to expand its testing. Mr. Aggarwal even added that the increasing ratio is higher in the other nations. In India, there are 17,869 total cases, and out of these 596 died due to pandemic spread.

As per the report of Thursday, the recovery in different states is as follows:

New Infections and Deaths are still a cause of worry

However, the rate of recovery in Delhi is quite low. There is a total of 3% of patients in Delhi affected with COVID-19, and out of these 1640 cases, only 51 instances showed recovery. However, the rate of increase in pandemic cases was due to the Tablighi Jamaat outbreak. The news of Jamaat’s came into light in the third week of March. Kerala observed daily one digit cases increase in the positive cases from the last week. Also, the rate of patient discharge from the hospitals in Tamil Nadu is less than the people taking admissions. 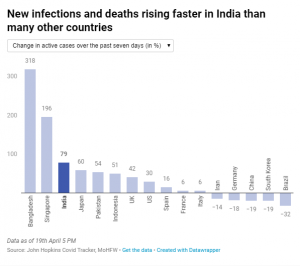 From April 11 to 17, Kerala observed 32 new patients. However, till now, 129 recovered in Kerala out of 395 total cases. The officials said that after April 20, the number of cases in Kerala would be around 500. 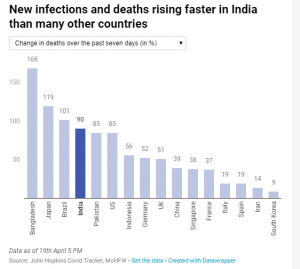 However, the COVID-19 patients who have diabetes and prior health issues have shown the least recovery as declared by the doctors.

India has now progressed, shifting from the traditional systems. It’s a hope that it will show the best results in the mean arriving time. 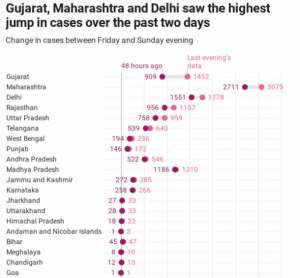