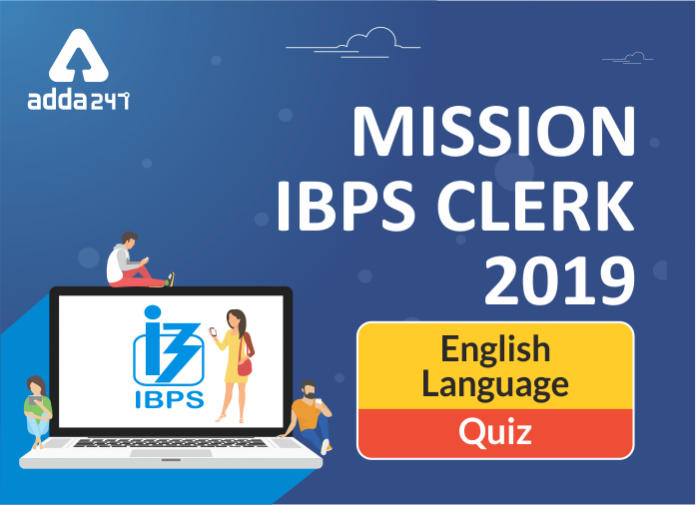 The English language perplexes most of the students and makes one nervous during the examination even if the answer to the question is known. But there are no formulas to cramp or the longer the calculation to deal with. The mistakes that occur are because of the lack of confidence. With proper strategy, Study Notes, Quizzes, Vocabulary one can calm his/her nerves and excel in no time. Make the reading newspaper, editorial a habit, and also participate in the daily quiz. The IBPS Clerk 2019 is just one step away from your reach. Here is the quiz under the Study Plan ‘FATEH’, on the IBPS Clerk Prelims English Quiz and we have Miscellaneous Quiz for 1st of October 2019. You can also check out the latest books for IBPS Clerk 2019 exam.

Q1.
Column (1):
(A) The summit occurring amid a steady
(B) The case raises multiple concerns regarding
(C) The rally’s unintended outcomes
Column (2):
(D) drum rolled scientific alarming
(E) environmental governance and adjudication
(F) could be more complex
(a) C-F and B-E
(b) A-F
(c) B-E
(d) A-E
(e) None of these

S1. Ans. (a)
Sol. Here, out of the given options, only C-F and B-E form contextually meaningful and grammatically correct sentences. The sentences thus formed are:
(i) The case raises multiple concerns regarding environmental governance and adjudication.
(ii) The rally’s unintended outcomes could be more complex.

Q2.
Column (1):
(A) In recent times, several government and
(B) It is pretty obvious to me that the answered
(C) Allowing someone to speak is
Column (2):
(D) the first precondition of being listened
(E) questions are in the affirmative
(F) private sector services have become digital
(a) C-F and B-E
(b) A-F
(c) B-E
(d) A-E
(e) None of these

S2 Ans. (b)
Sol. Here, out of the given options, only A-F form contextually meaningful and grammatically correct sentences. The sentence thus formed is:
(i) In recent times, several government and private sector services have become digital

Q3.
Column (1):
(A) Collegium system is deeply flawed,
(B) the ruling party is blocking his elevation
(C) Unequal access to the Internet creates and.
Column (2):
(D) it is reproducing socio-economic exclusion
(E) because of judicial orders, he had passed
(F) he needs urgent remedy
(a) C-F and B-E
(b) A-F
(c) B-E
(d) A-E
(e) None of these

S3. Ans. (c)
Sol. Here, out of the given options, only B-E form contextually meaningful and grammatically correct sentences. The sentence thus formed is:
(i) The ruling party is blocking his elevation because of judicial orders he had passed.

Q4.
Column (1):
(A) Citizens too must take more responsibility
(B) Good governments make a
(C) the court is silent on the fate of the
Column (2):
(D) there is a stay on residential apartments
(E) for cultivating these public virtues
(F) develop a habit of listening to citizens
(a) C-F and B-E
(b) A-F
(c) B-E
(d) A-E
(e) None of these

S4. Ans. (d)
Sol. Here, out of the given options, only A-E form contextually meaningful and grammatically correct sentences. The sentence thus formed is:
(i) Citizens too must take more responsibility for cultivating these public virtues.

Q5.
Column (1):
(A) India’s 130 crore population should be
(B) The findings further state that social media
(C) Facebook and Twitter attributed foreign
Column (2):
(D) she informed about benefits of digitalization.
(E) these has been co-opted by many authoritarian regimes.
(F) It has cast influence operations to seven countries
(a) C-F and B-E
(b) A-F
(c) B-E
(d) A-E
(e) None of these

S5. Ans. (e)
Sol. Here, none of the given options form a contextually meaningful and grammatically correct sentence. Thus, the right answer choice is (e) i.e, ‘None of these’.

Directions(6-10): In the question given below, there is a sentence in which one part is given in bold. The part given in bold may or may not be grammatically correct. Choose the best alternative among the four given which can replace the part in bold to make the sentence grammatically correct. If the part given in bold is already correct and does not require any replacement, choose option (e), i.e. “No replacement required” as your answer.

S6. Ans. (e)
Sol. Here, the highlighted phrase in the given sentence is grammatically correct and contextually meaningful. Hence, ‘no replacement is required’.

Directions (11-15): In the following passage there are blanks, each of which has been numbered. These numbers are printed below the passage and against each,five words are suggested, one of which fits the blank appropriately. Find out the
appropriate word in each case.