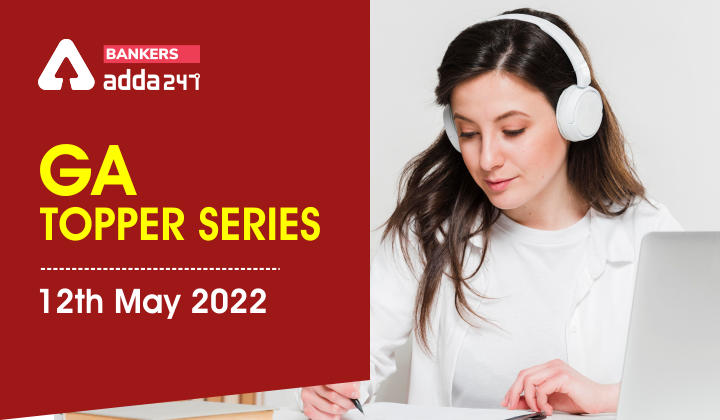 GA Topper Series: 12th May 2022: Hello Students, all those students who have cleared their prelims exams in the banking sector must be prepared with every topic in the General Awareness Section for the mains examinations. Bankersadda team has brought you up a new series in which we will come up with 10 questions with the correct answer and the detailed solution to the question.

Q1. Which of the following days is not celebrated on May 8th?

(c) Time of Remembrance and reconciliation for those who lost their lives during the Second World War.

Q2. Choose the incorrect statement about the Pulitzer award:

The 106th class of Pulitzer Prize winners in Journalism, Books, Drama, and Music were announced. The Pulitzer Prize is an award for achievements in newspaper, magazine, online journalism, literature, and musical composition within the United States. It was established in 1917 by provisions in the will of Joseph Pulitzer, who had made his fortune as a newspaper publisher, and is administered by Columbia University.

In Fiction, The Netanyahus: An Account of a Minor and Ultimately Even Negligible Episode in the History of a Very Famous Family, by Joshua Cohen.

In History, Covered with Night, by Nicole Eustace, and Cuba: An American History, by Ada Ferrer

Q3. Which wing of defense forces is planning to purchase GISAT-2?

The Indian Navy plans to purchase a specialized earth imaging satellite Geo Imaging Satellite-2 (GISAT-2), this fiscal year as part of its modernization.

GSAT-7A is an advanced military communications satellite meant primarily for the Indian Air Force with the Indian Army using 30% of its capacity.

The Indian Army will soon get the much-awaited dedicated communication satellite GSAT-7B, which will boost its operational capabilities.

GSAT-7 (Rukmini) and GSAT-7A are India’s only two dedicated military satellites made for the Navy and Air Force respectively. The Indian Army currently uses 30 percent of the GSAT-7A’s transponder capacity.

Q4. Which company recorded annual revenue of more than $100 billion?

Reliance Industries become the first Indian company to record annual revenue of more than a whopping $100 billion. The company has recorded a 22.5% rise in net profit for the quarter ended March 2022. Reliance has recorded strong growth in retail, digital services, and the oil & gas business. The company has also reported the highest-ever quarterly EBITDA (earnings before interest, taxes, depreciation, and amortization) of Rs 33,968 crores (28% up) year-on-year.

Q5. Who won the gold medal in Deaflympics?

Abhinav Deshwal has won the second gold medal for India in shooting at the ongoing 24th Deaflympics in Caxias do Sul, Brazil.

Shooter Dhanush Srikanth has won gold and Shourya Saini has won the bronze in the men’s 10m air rifle competition in the 24th Deaflympics at Caxias do Sul, Brazil. Later, the Indian badminton team also won gold after beating Japan by 3-1 in the final to make it a double celebration for the country

The Jammu & Kashmir team for deaf clinched 1st position in World Deaf Judo Championship held at Paris Versailles, France. Rakshanda Mehak who is part of the Indian team for the deaf clinched the bronze medal by defeating the South Korean team in the semifinal.

Q6. Under which ministry does the Office of the Registrar General come in?

(a) Ministry of statistics

(b) Ministry of Consumer affairs

Why in news?
It has released its annual report namely ‘Vital Statistics of India Based on the Civil Registration System (CRS) 2020′ which presents a compilation of data on registered births, deaths, infant deaths, and stillbirths with rural-urban & sex-wise break-up and sex ratio at birth.

Q7. Who has been sworn as President of South Korea?

Yoon Suk-yeol was sworn in as South Korean president in a huge ceremony at Seoul’s National Assembly, taking office at a time of high tensions with nuclear-armed North Korea.

Aleksandar Vučić has been re-elected as the President of Serbia.

Q8 Who has been the chairman of the committee for ESG constituted by SEBI?

The Securities and Exchange Board of India (SEBI) has constituted a committee for advising on Environmental, Social, and Governance (ESG) related matters in the securities market. The committee will be chaired by Navneet Munot, the Chief Executive Officer (CEO) of HDFC Mutual Fund.

Q9.Kalam website launched b Lok Sabha speaker is for what objective?

(a) to increase science innovation among girls

(b) to increase awareness about missile technology

(c) to provide a platform for ideas for satellites

The aim of Kalam is to popularize Hindi literature and provide a platform for veteran and young authors and poets to talk about their writings and love for vernacular literature.

Q10 under which article does centre provides the post-devolution revenue deficit grant on the recommendation of the finance commission?

the Centre provides the Post Devolution Revenue Deficit Grant to the States under Article 275 of the Constitution.

The grants are released as per the recommendations of the Finance Commission in monthly installments to meet the gap in Revenue Accounts of the States post-devolution (of the divisible tax pool of the Centre).