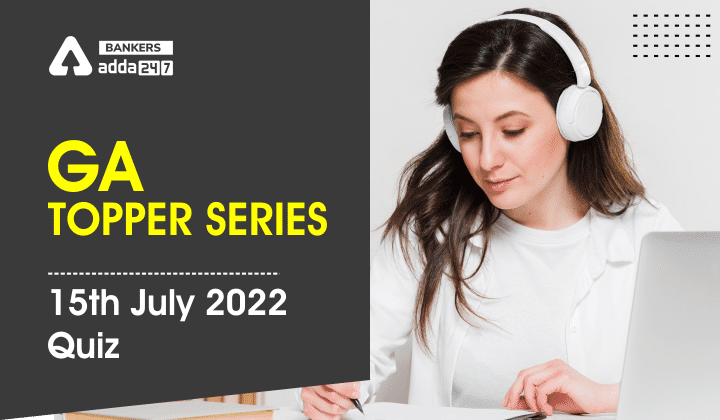 GA Topper Series: 15th July 2022: Hello Students, all those students who have cleared their prelims exams in the banking sector must be prepared with every topic in the General Awareness Section for the mains examinations. Bankersadda team has brought you up a new series in which we will come up with 10 questions with the correct answer and the detailed solution to the question.

Q1. Which country is going to invest 2 billion dollars in Integrated Food Parks  across India?

Q2. What is the set target in defence production by 2025?

Q4. Who scripted history by becoming the youngest to complete the Analog Astronaut programme?

Q5. How many medals did Indian Wrestles won in U20 Asian Wrestling Championships ?

Q6. What is the name of the author of the book titled “The McMahon line: A century of discord”?

Q7. Which Indian Pharma Company made HPV vaccine and got the DCGI approval?

(b) Serum Institute of India

Q9. Padma Shri winning noted social worker Avdhash Kaushal, What was the name of his NGO?

(a) Rural Litigation and Entitlement Kendra

Q10. India ranks 135 among a total of 146 countries in the Global Gender Gap Index 2022 of the World Economic Forum (WEF), In which sub-indices India ranked last?

(a) economic participation and opportunity

The UAE has announced to invest two billion dollars to develop a series of Integrated Food Parks across India. These parks will incorporate state-of-the-art climate-smart technologies to reduce food waste and spoilage, conserve fresh water and employ renewable energy sources. India will provide appropriate land for the project and will facilitate farmers’ integration into the food parks. US and Israeli private sectors will be invited to lend their expertise and offer innovative solutions that contribute to the overall sustainability of the project. These investments will help maximize crop yields and help tackle food insecurity in South Asia and the Middle East.

Rajnath Singh announced that the Ministry of Defence has set a target of Rs 1.75 lakh crores in defence production by 2025, which includes Rs 35,000 crores in exports.

Rohit Sharma, the captain of India, became the first captain in cricket history to win 13 straight T20Is. This accomplishment was made by Rohit in Southampton

Shikhar Dhawan, an Indian cricketer, announced a partnership with Web3 metaverse startup WIOM and financial firm Bliv.Club to build the first sports city in the metaverse.

Mohammed Shami became the fastest Indian bowler to 150 ODI wickets in first India vs England ODI at the Kennington Oval.

Indian grapplers had a fantastic outing at the U20 Asian Wrestling Championships in Manama, Bahrain where they won as many as 22 medals that concluded. Winning 4 gold medals, 9 silver and 9 bronze, the talented bunch of grapplers put up a good show and gave a stiff fight to worthy competitors from Iran and Kazakhstan, among other strong nations.

The Governor of Himachal Pradesh, Rajendra Vishwanath Arlekar, recently released a book titled “The McMahon line: A century of discord”. The book has been authored by General JJ Singh (Retd), the former Governor of Arunachal Pradesh and former Chief of Army Staff (CoAS). The book is based on the experiences and research of General JJ Singh on the India-China border dispute

The Drugs Controller General of India (DCGI) has approved the market authorization of India’s first quadrivalent Human Papillomavirus vaccine (qHPV) against cervical cancer. The Serum Institute of India (SII) will produce this vaccine. CEO of The Serum Institute of India Adar Poonawalla tweeted the information. For the first time, an inexpensive and widely available HPV vaccination made in India will be available to treat cervical cancer in female patients. Later this year, SII hopes to launch it, and we are grateful to the DCGI, MoHFW INDIA, for their approval.

Students of the Delhi Skill and Entrepreneurship University (DSEU) will now have access to job opportunities thanks to a new pilot project the Delhi government announced with United Nations International Children’s Emergency Fund (UNICEF). DSEU and UNICEF have introduced ‘Career Awareness Sessions’ for students. Skill Varsity of Delhi joins hands with YuWaah (Generation Unlimited India) at UNICEF to enable access to employment opportunities, assist students in becoming job ready as well as listen to and amplify the voices of young people.

Padma Shri winning noted social worker Avdhash Kaushal passed away recently following a prolonged illness. He was 87. He was the founder of the NGO named Rural Litigation and Entitlement Kendra (based in Dehradun, Uttarakhand).

India ranks 135 among a total of 146 countries in the Global Gender Gap Index 2022 of the World Economic Forum (WEF).

The Global Gender Gap Index benchmarks gender parity across four key dimensions or sub-indices — economic participation and opportunity, educational attainment, health and survival, and political empowerment. It measures scores on a 0 to 100 scale.