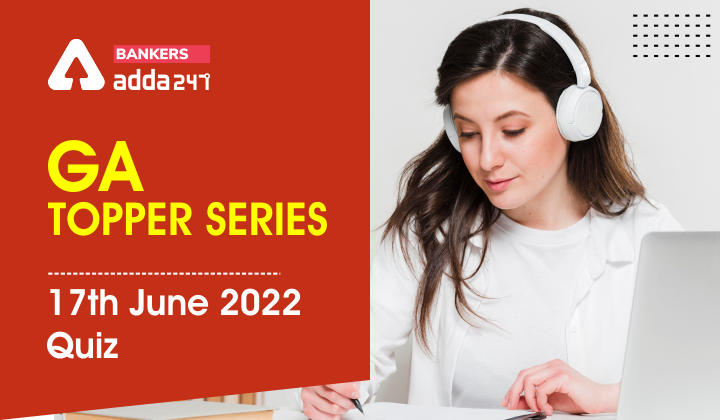 GA Topper Series: 17th June 2022 Quiz: Hello Students, all those students who have cleared their prelims exams in the banking sector must be prepared with every topic in the General Awareness Section for the mains examinations. Bankersadda team has brought you up a new series in which we will come up with 10 questions with the correct answer and the detailed solution to the question.

Q3. Federal reserve is the central bank of which country?

Q5. The first train to be operated by a private operator, under the ‘Bharat Gaurav’ scheme of the Indian Railways, was flagged off was between which stations?

(a) Delhi and Shirdi

(b) Lucknow and Prayagraj

Q6. Which institution calculates the Wholesale Price Index in India?

(a) Office of Economic Advisor

Q7. What is the name of the Financial wellness platform on WhatsApp?

Q8. Which ministry launched a startup policy for innovation in the railway sector?

(a) Ministry of Railways

(b) Ministry of  MSME

Q9. What is the maximum age limit for holding a Kisan Credit card?

Bureau of Indian Standards (BIS), the National Standards Body of India, has developed an Indian Standard, IS 17693: 2022 for a ‘non-electric cooling cabinet made of clay’.Named as ‘Mitticool refrigerator’, Shri Mansukh Bhai Prajapati from Gujarat is the innovator behind the refrigerator which projects an eco-friendly technology.

The BRICS Partnership on New Industrial Revolution (PartNIR) Innovation Center and the BRICS New Growth Bank (NDB) signed a memorandum of understanding (MoU) to enhance bilateral cooperation and boost BRICS countries’ common development. The name BRICS stands for Brazil, Russia, India, China, and South Africa, a group of emerging markets. It is home to more than 40% of the worldwide population and a quarter of the global economy.

Federal Reserve is the Central Bank of the USA.

Federal Reserve increased its main interest rate by three-quarters of a percent, the largest increase in almost three decades, and signaled that more large rate increases are on the way.

Google announced a startup accelerator program for women founders. The program will help them address challenges such as fundraising and hiring. Google for Startups Accelerator India – Women Founders will run from Jul-2022 to Sep-2022. The program is part of a larger effort by Google towards improving the representation of women across different sections of India’s digitally-trained workforce — be it entrepreneurship, professionals looking to upskill, or young graduates seeking a headstart on their careers.

The first train to be operated between Coimbatore and Shirdi by a private operator, under the ‘Bharat Gaurav’ scheme of the Indian Railways, was flagged off. The train will cover several historical destinations on the route while giving the passengers an insight into the cultural heritage of the country.

WPI calculated by the Office of Economic adviser

Wholesale price inflation spiked to 15.88% in May, the highest since September 1991 as a surge in price pressure in food and fuel overwhelmed a moderation in the dominant manufactured product segment. In April, the WPI inflation was recorded at 15.08%. Inflation based on the wholesale price index (WPI) has remained in double digits for 14 months now, mirroring elevated global commodity prices, especially oil, according to the official data released.

Financial wellness platform, CASHe has launched an industry-first credit line service using its AI-powered chat capability on WhatsApp to provide customers with a fast, seamless and convenient way to access instant credit lines by merely typing their name. The firm offers an instant credit limit without the need for any documents, app downloads, or filling up tedious application forms.

E kuber is the banking system of RBI, MANI app is an app for Visually impaired people to identify the currency notes.

Union Railway Minister, Ashwini Vaishnav has launched “StartUps for Railways”, an important initiative in the field of innovation. Aiming at bringing about innovative solutions to problems like rail fracture, reduction of time between two trains, and other passenger-related issues. The innovation policy is expected to bring about scale and efficiency in the field of operation, maintenance, and infrastructure creation through the participation of a very large and untapped startup ecosystem.

On 15th June, Global Wind Day is celebrated across the world, annually and it is marked as a day of discovering the possibilities of wind power.