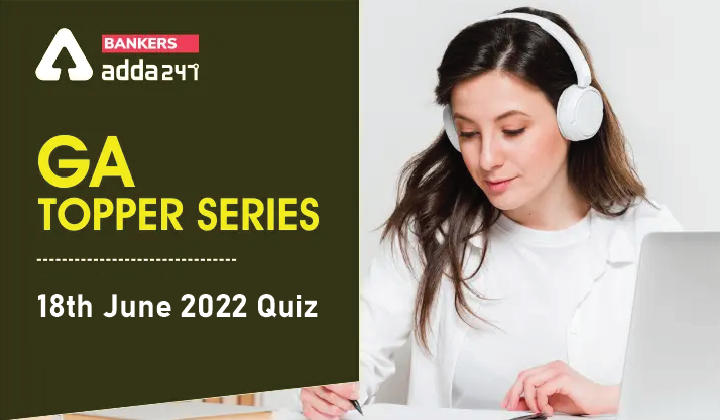 GA Topper Series: 18th June 2022 Quiz: Hello Students, all those students who have cleared their prelims exams in the banking sector must be prepared with every topic in the General Awareness Section for the mains examinations. Bankersadda team has brought you up a new series in which we will come up with 10 questions with the correct answer and the detailed solution to the question.

Q1. Which of the following is not a member of the Shanghai Cooperation Organization?

Q2. The 5th BIMSTEC Summit was held at ?

Q5. Which state has the largest outstanding portfolio of microfinance loans?

(b) International Institute for Management Development

Q7. Which country announced the formation of I2U2?

The Union Cabinet approves the Agreement on Cooperation in the field of youth work among the authorized bodies of the member states of the Shanghai Cooperation Organization (SCO).

The Cabinet also approved a Memorandum of Association (MoA) by India for the establishment of the Bay of Bengal Initiative for Multi-Sectoral Technical and Economic Cooperation (BIMSTEC) Technology Transfer Facility (TTF), which was signed by the BIMSTEC member countries at the 5th BIMSTEC Summit held at Colombo, Sri Lanka

According to Micrometer Q4 FY22 data, Tamil Nadu has overtaken West Bengal as the state with the largest outstanding portfolio of microfinance loans.

According to the International Institute for Management Development (IMD)’s annual World Competitiveness Index – 2022 (34th edition) India has jumped 6 positions from 43rd in 2021 to 37th in the 2022 ranking. India has recorded the sharpest rise among the Asian economies.

Denmark has topped the 2022 ranking featuring 63 economies, followed by Switzerland(2nd) and Singapore(3rd).

The United States of America (USA) has announced the formation of I2U2, a new group that includes India, Israel, the USA, and the United Arab Emirates (UAE).

The new grouping is known as “I2U2,” with “I” standing for India and Israel and “U” standing for the USA and the UAE. The grouping, which was given the name International Forum for Economic Cooperation and is commonly known as the “West Asian Quad”, was an outcome of the Abraham Accords that paved the way for trilateral collaboration between India, Israel and the UAE

India successfully carried out the night launch of a Short-Range Ballistic Missile, PrithviII from an integrated test range, Chandipur, Odisha