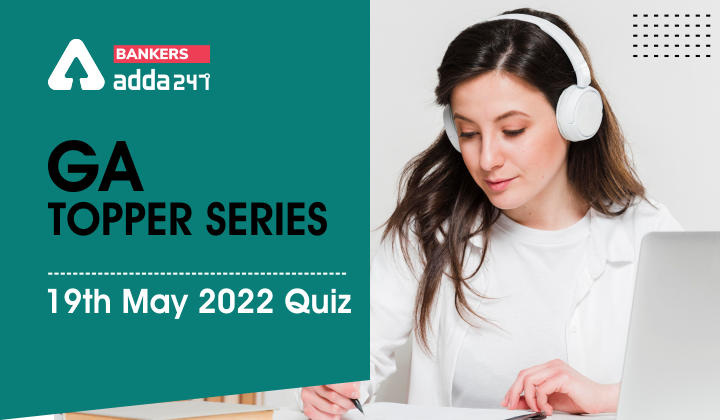 GA Topper Series: 19th May 2022 Quiz: Hello Students, all those students who have cleared their prelims exams in the banking sector must be prepared with every topic in the General Awareness Section for the mains examinations. Bankersadda team has brought you up a new series in which we will come up with 10 questions with the correct answer and the detailed solution to the question.

Q1. What is the name of the latest tiger reserve notified by the Indian government?

Q2. Which two initiatives were launched by Hardeep Singh Puri, Minister of Housing and Urban Affairs at the Plumbex exhibition?

Q3. According to RBI data on frauds which bank reported a large number of small value frauds?

(b) State Bank of India

Q5. Which of the statements are correct regarding the Collective Investment Scheme (CIS)?

Q6. Who has become the prime minister of France?

Q7. Which company and how much stake it buy in Vodafone?

Q9. Who has been elected as non executive chairman of Gram Unnati?

Q10. Where is the world’s largest suspension bridge built?

The highest amount in fraud cases was reported by the Punjab National Bank (PNB) worth Rs 9,528.95 crore involving 431 such incidents.

Amendments to a collective investment scheme:

i.SEBI has mandated a minimum of 20 investors and a subscription amount of at least Rs 20 crore for each CIS. No single investor will hold more than 25 percent of the assets under management of such schemes

ii. SEBI has also put a cap on cross-shareholding in Collective Investment Management Company (CIMC) to 10% to avoid conflict of interest.

iii. CIS will not be open for subscription for more than 15 days. At present, this limit is for 90 days

Patrick Achi has been re-appointed as Prime Minister of Ivory Coast by President Alassane Ouattara.

UAE based ‘Etisalat and’ buys a 9.8% stake in Vodafone USD 4.4 billion

Cameroon Activist, Cécile Ndjebet has won the 2022 Wangari Maathai Forest Champions Award in recognition of her outstanding contribution to preserving forests and improving the lives of people who depend on them.

United Nations Environment Programme (UNEP) has named Sir David Attenborough, English natural history broadcaster and naturalist, as the recipient of the Champions of the Earth Award 2021

Sunil Arora, the former chief election commissioner, has been named as the new non-executive chairman of Gram Unnati’s board. Gram Unnati is a social venture that helps farmers increase their net income by increasing price realization, enhancing agricultural productivity, and lowering cultivation costs.

The world’s largest suspension bridge has opened to travelers in the Czech Republic. The bridge had been under construction for nearly about two years. Sky Bridge 721 is the name given to it.