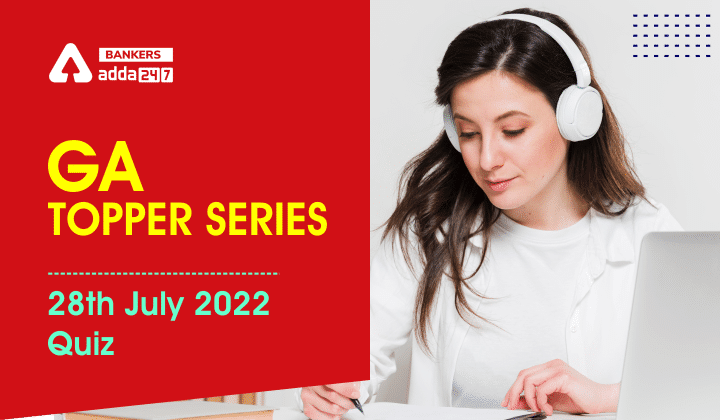 GA Topper Series: 28th July 2022: Hello Students, General Awareness is an essential part of all government exams. It’s better to prepare this section daily and revise the same using the factsheet provided. Bankersadda team has brought you up a new series in which we will come up with 10 questions and answers, other options of the question have related news to them. So don’t miss reading the solutions.

Q1. A district called “Darwaza of Dakhin’, which was declared the first ‘Har Ghar Jal’ certified district in the country, is in which state?

Q2. WHO has recently declared which outbreak as a “public health emergency of international concern” (PHEIC) 2022?

Q3. ‘Banthia Commission’ report, which was seen in the news, is associated with which field?

(a) Reservation in educational institute

(b) Reservation in Local Bodies

Q4. National games are going to be held in Gujarat in 2022. It is which edition of the national games?

Q5. Consider the following statements and fill in the blanks :

(d) None of the above combination

Q6. 68th National Film Awards were announced at the National Media Centre in New Delhi, Which Ministry announces these awards?

(a) Ministry of Culture

(b) Ministry of Information and Broadcasting

Q7. Who was awarded the best actress at the 68th national film awards?

Q9. “Jerusalem Declaration’ which was seen in the news, is a strategic agreement between Israel and which country?

Q10. Which Indian city has been selected as the first Cultural and Tourism Capital of SCO for 2022-23?

Burhanpur district in Madhya Pradesh becomes the first ‘Har Ghar Jal’ certified district in the country.
It is also called the ‘Darwaza of Dakhin’. After the launch of ‘Jal Jeevan Mission’ in 2019, Panchayat representatives, Pani Samitis and district officials of Burhanpur took efforts to achieve functional tap water connections to all its 1,01,905 rural households within a span of 34 months.

The World Health Organisation has declared the global monkeypox outbreak a ‘public health emergency of international concern’ (PHEIC).
This classification is one step below that of a ‘pandemic.’ WHO says the expanding monkeypox outbreak in over 70 countries is now qualified as a global emergency.

Supreme Court has accepted the report of the Banthia Commission and directed the Maharashtra State Election Commission to hold elections as per the report.
It paves way for political reservation for candidates belonging to Other Backward Classes in the Local Bodies’ Elections in the state. The candidates will get 27 percent political reservation in local self-government elections in the state

The 36th National Games, Gujarat 2022 is scheduled between September 27- October 10 in six cities of Gujarat. The six cities include Gandhinagar, Ahmedabad, Surat, Vadodara, Rajkot and Bhavnagar.

A logo was also launched which depicts the Statue of Unity of Sardar Vallabhbhai Patel and the Gir Asiatic Lion. The tagline of the event is “Celebrating Unity Through Sports”.

68th National Film Awards were announced at the National Media Centre in New Delhi to honour best films of 2020 of Indian Cinema. The event for the same was organized by the Directorate of Film Festivals, which comes under the Ministry of Information and Broadcasting (MIB).

The Best Actor award shared by Suriya and Ajay Devgn.

National School of Drama (NSD), New Delhi is organizing a festival “Azadi Ka Amrit Mahotsav – 22nd Bharat Rang Mahotsav, 2022.
NSD is an autonomous organization under the Ministry of Culture. The festival aims to remember and pay tribute to our freedom fighters, under ‘Azadi Ka Amrit Mahotsav 2022’. The festival will be inaugurated in New Delhi and it will be organized in 5 other cities of Bhubaneswar, Varanasi, Amritsar, Bengaluru, and Mumbai.

A joint declaration on US-Israeli strategic cooperation has been signed by President Joe Biden and Israeli Prime Minister Yair Lapid.
The statement has been claimed as historic in the strategic US-Israel partnership and the commitment of the United States to Israel’s security. The Jerusalem Declaration also refers to the Israeli-Palestinian relations

The city of Varanasi will be declared the first Cultural and Tourism Capital of the Shanghai Cooperation Organisation (SCO).
Varanasi will become the Capital of SCO for 2022-23 under a new rotating initiative by the eight-member organisation, which aims to promote people-to-people contacts and tourism among the member states.