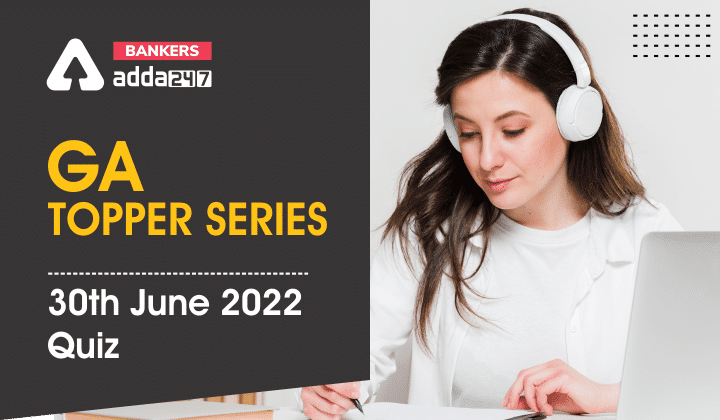 GA Topper Series: 30th June 2022 Quiz: Hello Students, all those students who have cleared their prelims exams in the banking sector must be prepared with every topic in the General Awareness Section for the mains examinations. Bankersadda team has brought you up a new series in which we will come up with 10 questions with the correct answer and the detailed solution to the question.

Q1. ABHYAS – High speed Expendable Aerial Target (HEAT) which was successfully tested is an/ a

Q2. National MSME Award 2022 to States/UTs for outstanding contribution in the promotion and development of the MSME Sector is given to which state?

Q3. Batsagaan Temple is located in which country?

Q5. What is the full form of the GOAL program?

(a) Get online as leaders

(b) Going Online As Leaders

Q8. At which conference 30×30 strategy was launched?

(a)  UN Conference on Combat Desertification

Q10. Which state has started the Kashi Yatra project?

ABHYAS – High-speed Expendable Aerial Target (HEAT) was successfully flight-tested from the Integrated Test Range (ITR), Chandipur off the coast of Odisha. The performance of the aircraft at low altitudes including sustained level and high maneuverability was demonstrated during the test flight

The Micro, Small and Medium Enterprises (MSMEs) Department, Government of Odisha has been awarded first prize in the category “National MSME Award 2022 to States/UTs for outstanding contribution in the promotion and development of MSME Sector” by virtue of various developmental initiatives taken up for the development of MSMEs. Bihar and Haryana were second and third respectively

Following a 12-day exhibition at the Batsagaan Temple on the grounds of Gandan Monastery, Mongolia, the four Holy Relics of the Lord Buddha returned to India.

National Insurance Awareness Day is annually observed on 28th June to create awareness about Insurance which offers security in several situations and to make people aware of the benefits of investing in insurance plans.

Going Online as Leaders (GOAL) Program was launched by Facebook in partnership with the Ministry of Tribal Affairs (MoTA) on 15th May 2020 to digitally skill and empower 5000 youth from tribal communities over the next five years. It second phase launched in new Delhi.

Prime Minister Narendra Modi will visit Bhimavaram town in West Godavari District of Andhra Pradesh on July 4th to participate in the 125th birth anniversary of freedom fighter Alluri Seetharama Raju. Prime Minister will unveil the statue of Seetharama Raju on the occasion.

The 30×30 target implies the protection of at least 30 % the of world’s land and ocean by 2030. The 30×30 target is a global target that aims to halt the accelerating loss of species and protect vital ecosystems that are the source of our economic security.

Minister of Communications Ashwini Vaishnaw launched ‘Dak Karmayogi’. It is an e-learning portal for the Department of Posts.

Karnataka government launched ‘Kashi Yatra’ with a project outlay of Rs. 7 crores. The project provides Rs 5,000 cash assistance to each of the 30,000 pilgrims, who are willing to take up a pilgrimage to Kashi Vishwanath Temple in Varanasi, Uttar Pradesh (UP).