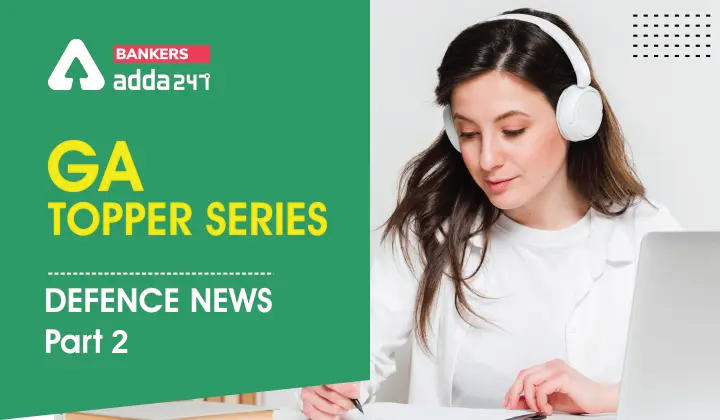 Each news is given with facts in bullets for better retention.

1. MOD authorized an increase in financing for MSMEs and startups under the Ministry of Defence’s Technology Development Fund (TDF) plan. The initiative, which encourages the development of indigenous components, products, systems, and technologies, will now have a maximum project value of Rs 50 crore, up from Rs 10 crore previously. The increased funding is in accordance with the budget announcement and will help the government achieve its goal of self-reliance in the defence sector, according to the defence ministry. To facilitate increased funding for innovative TDF products, the Union Budget for 2022-23 has reserved 25 per cent of the defence R&D budget for private industry, start-ups and academia.

2. The equipment and platforms worth Rs 76,390 crores from domestic industries were approved by DAC. This decision was taken to emphasize the governmental program Aatmanirbhar Bharat Campaign, which implies India will depend less on foreign supplies and decrease spending on international trading.

3. Indian Army participates in a multinational exercise “Ex Khaan Quest 2022” where 16 other countries also took part in Mongolia. President of Mongolia, Ukhnaagiin Khurelsukh inaugurated the Exercise as the host. Indian Army is represented by a contingent from the LADAKH SCOUTS. The 14-day exercise is aimed at enhancing interoperability, building military-to-military relationships, and developing peace support operations and military readiness among participating nations.

4. India has successfully executed a nuclear-capable Agni-4 ballistic missile from APJ Abdul Kalam Island in Odisha. The missile has a range of around 4,000 kilometres

5. India-Bangladesh bilateral defence cooperation, a joint military training exercise Ex SAMPRITI-X is being conducted at Jashore Military Station in Bangladesh. The aim of the exercise is to strengthen interoperability between the two armies and to understand each other’s tactical drills and operational techniques The Indian contingent of company strength is being represented by a Battalion of the DOGRA Regiment.

6. A heritage centre to showcase the role of the Indian Air Force in various wars and its overall functioning will come up in Chandigarh. The ‘IAF Heritage Centre’ will be set up jointly by the force and the Chandigarh administration

7. The Defence Ministry has signed a contract with the defence public sector undertaking Bharat Dynamics Limited (BDL) for the supply of the indigenously developed Astra Mk-I Beyond Visual Range (BVR), air-to-air missiles and associated equipment for the Indian Air Force (IAF) and the Navy at a cost of Rs 2,971 Crore.

8. INS Gomati was decommissioned at the Naval Dockyard under the command of Captain Sudip Malik. INS Gomati derives her name from the vibrant river Gomti and was commissioned on 16 April 1988 by then Defence Minister, KC Pant, at Mazgaon Dock Ltd, Bombay. The third ship of the Godavari class guided-missile frigates, INS Gomati was also the oldest warrior of the western fleet when decommissioned.

9. Nirdeshak, the second of the four Survey Vessels (Large) (SVL) projects being built by Garden Reach Shipbuilders and Engineers (GRSE) in collaboration with L&T shipbuilding for the Indian Navy was launched, at Kattupalli, Chennai. The ship has taken its name from erstwhile Nirdeshak which was also an Indian Naval Survey ship and was decommissioned after 32 years of glorious service in December 2014.

10. Haryana’s Captain Abhilasha Barak has become the first woman officer to join the Army Aviation Corps as a combat aviator after successfully completing her training. She was awarded the coveted wings along with 36 other army pilots by the DG and Colonel Commandant of Army Aviation in Nashik. She has been assigned to the second flight of the 2072 Army Aviation Squadron. She was commissioned into the Indian Army from the Officers Training Academy, Chennai in 2018.

11. The third edition of Indian Navy (IN) – Bangladesh Navy (BN) Bilateral Exercise ‘Bongosagar’ commenced at Port Mongla, Bangladesh. The Harbour Phase of the exercise begins from 24-25 May which will be followed by a Sea Phase in the Northern Bay of Bengal from 26-27 May.

12. The Indian Air Force (IAF) ranks third on World Air Power Index in terms of Fighting strength of different air force services of different countries. In 2022, the world directory of modern military Aircraft (WDMMA) published the Global Air Power Rankings. In this report, the Indian Air Force is placed in third place, The US tops the list followed by Russia. China is in the 4th position.

13. The Army Training Command and Gandhinagar-based Rashtriya Raksha University (RRU) inked a memorandum of understanding (MoU) to establish a Wargame Research and Development Centre in New Delhi. The project, dubbed ‘WARDEC’ as a prototype, will be India’s first simulation-based training centre, which will use artificial intelligence (AI) to create virtual reality wargames.

14. The fourth edition of the Indian Navy-Bangladesh Navy Coordinated Patrol (CORPAT) commenced. The patrolling drill commenced in the northern Bay of Bengal.  Both units will undertake joint patrolling along International Maritime Boundary Line. The last IN-BN CORPAT was conducted in October 2020

The Indian Air Force was established on 8th October 1932. On 1st April 1933, the first ac flight came into being with six RAF-Trained officers and 19 Havai Sepoys (air-soldiers). Some of the major operations executed by IAF are operation Vijay, Operation Meghdoot, operation cactus, and operation Poomalai. IAF has been involved in four major wars with Pakistan since 1950. The Motto of the Indian Air Force (Touch the sky with Glory) has been taken from the eleventh chapter of the Gita, the Discourse given by Lord Krishna to Arjuna on the battlefield of Kurukshetra during the Great War of Mahabharata.

Royal Indian Marine (RIM) was constituted in 1892. Post-independence Vice Admiral R D Katari, become the first Indian Naval Officer to take over as the Chief of the Naval Staff of the Indian Navy in 1958. The invocation to Lord Varuna (The Sea God) in the Vedas was adopted by the Indian Navy for its emblem, with the Motto: “Sam no Varunah”, meaning: “Be auspicious unto us Oh Varuna”. The inscription of “Satyamev Jayate” below the State Emblem was included in the Indian Navy’s Crest. The Indian Navy Day is celebrated on December 4 every year to remember Operation Trident. Operation Trident was a counter-attack by the Indian Navy on the Karachi harbour during the Indo-Pakistan war in 1971.

The motto of the Indian Army is “Service before Self”. Army day is celebrated on January 15th every year commemorating the taking over of the position of Commander in chief of the Indian army by field Marshal Kodandera M. Cariappa from General Francis Roy Bucher in 1949.

If there is any topic in general awareness you want to read about you can write to us in the comment section.