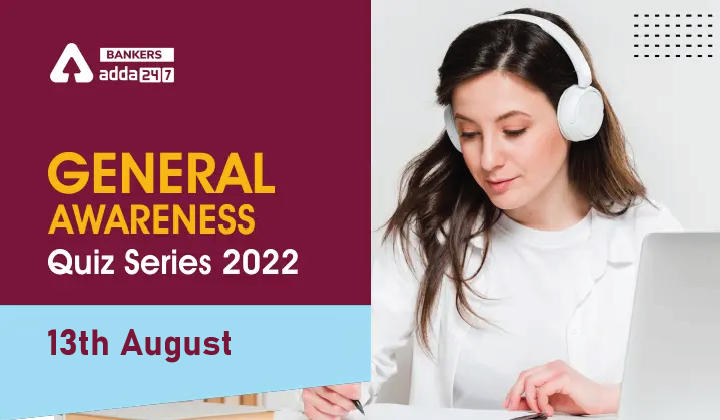 General Awareness Quiz Series 2022: 13th August: Hello Students, General Awareness is an essential part of all government exams. It’s better to prepare this section daily and revise the same using the factsheet provided. Bankersadda team has brought you up a new series in which we will come up with 10 questions and answers, other options of the question have related news to them. So don’t miss reading the solutions.

Q2. UMEED Market Place as part of the AVSAR Scheme is of which institution?

(b) Airport Authority of India

Q3. With which company Ministry of Skill Development & Entrepreneurship (MSDE) has signed an agreement to teach its digital toolkit to almost 2.5 million civil servants

Q6. Which cooperative bank licence was cancelled by the RBI in August?

Q7. What is the name of the marketplace for discounting trade receivables, and HDFC Bank have partnered to provide small businesses’ access to financing at competitive interest rates?

Q8. Who has been named as the State Brand Ambassador of Uttarakhand.?

Q9. What is the name of the place where Subahs Chandra Bose’s made the infamous call” chalo delhi”?

Q10.Khayyam Satellite is of which country?

Microsoft and the Indian government will work together on a programme to teach its digital toolkit to almost 2.5 million civil servants. The Ministry of Skill Development & Entrepreneurship (MSDE), the Capacity Building Commission (CBC), and the tech giant are working together to support civil servants in their efforts to assist the less fortunate with the help of Microsoft.

The Reserve Bank of India has cancelled the licence of Pune-based Rupee Co-operative Bank Ltd as the lender does not have adequate capital and earning prospects.

The Reserve Bank of India (RBI) has imposed a monetary penalty of ₹2.33 crore on Hyderabad-based Spandana Sphoorty Financial Ltd for its failure to adhere to the pricing of credit guidelines for NBFCs

M1xchange (TReDs platform), a marketplace for discounting trade receivables, and HDFC Bank have partnered to provide small businesses’ access to financing at competitive interest rates. To debut on the Trade Receivables Discounting System (TReDs) platform, HDFC Bank has joined forces with M1xchange, a project of Mynd Solutions Pvt Ltd. This action is anticipated to provide corporate buyers and MSMEs with high liquidity at competitive interest rates

PokerBaazi.com, a poker platform, has onboarded actor Shahid Kapoor as its brand ambassador.

National Heritage Board stated that Padang (location of Netaji Subahs Chandra Bose’s infamous Call “Chalo Dilli”) will now receive the Monument Status of Subas Chandra Bose. It is in Singapore

Russian rocket has successfully launched an Iranian satellite into orbit from southern Kazakhstan. An Iranian satellite named Khayyam into orbit by the Soyuz rocket from the Russia-leased Baikonur launch facility in Kazakhstan. The name of the satellite was named after Omar Khayyam, a Persian scientist who lived in the 11th and 12th centuries. The satellite fitted with the high-resolution camera will be used for environmental monitoring and will remain fully under its control.