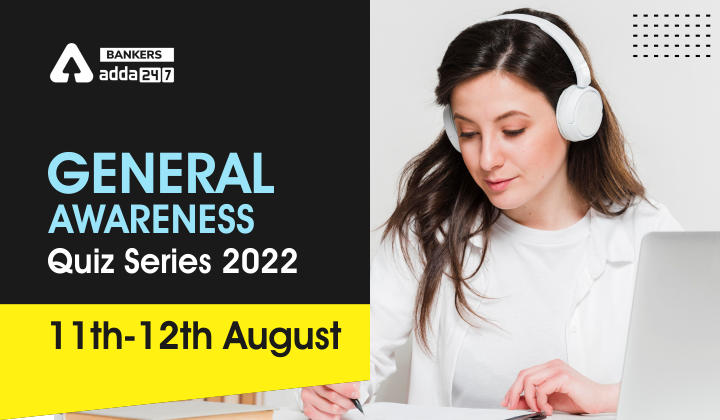 General Awareness Quiz Series 2022: 11-12th August: Hello Students, General Awareness is an essential part of all government exams. It’s better to prepare this section daily and revise the same using the factsheet provided. Bankersadda team has brought you up a new series in which we will come up with 10 questions and answers, other options of the question have related news to them. So don’t miss reading the solutions.

Q1. Which of the following is not part of  UNESCO’s World Heritage Site?

Q2. Which is the last state which joined the Central Government’s scheme of One Nation, One Ration Card (ONORC)?

Q4. PV Kamraj recently passed away, He was associated to which field?

Q5. Which tennis player has announced its retirement after the US Open 2022?

(b) Game is on, Crocodile

Q7. Who has won the World Women Entrepreneurs’ Award 2022?

Q8. Who has been named 2022 All India Football Federation (AIFF)  womes’s Footballer of the year?

Q9. What is the minimum net worth for SFb to deal in foreign exchange?

Q10. BM-SEAL-11 Concession Project is in which country?

The United Nations Educational, Scientific and Cultural Organization (UNESCO) has announced that the 106 years old Astronomical Observatory at Langat Singh College in the Muzaffarpur district of Bihar has not been inscribed on UNESCO’s list of endangered heritage

The Central Government’s scheme of One Nation, One Ration Card (ONORC) completed 3 years of its operation on August 9, 2019. It is implemented all over the country with Assam being the last state (36th) to join the initiative in June 2022.

India’s Former International Athlete PV Kamaraj, who was a part of the 4x400m Indian men’s relay team that won bronze at the 1979 Asian Championships in Tokyo, Japan, has passed away in Chennai, Tamil Nadu. He was born in Pudhukottai, Tamil Nadu

Tennis legend Serena Williams announced her retirement in a Vogue article after the U.S. Open, which will be conducted in late August 2022 into early September 2022

Birmingham 2022 CWG was the first carbon neutral CWG. The event was premised upon the following four steps that were taken to manage and measure its carbon footprint

The official motto of Birmingham 2022 was ‘Games for Everyone’ which seeks to bring people together, connecting athletes from countries far and wide, or communities from across the city and region.

The Emblem was a blue and yellow ‘B’ which is meant to link the venues of the sporting events to be held as part of the games. The colour palette represents Birmingham as the youngest city in Europe.

The mascot for the 2022 Birmingham CWG was ‘Perry’, a multi-coloured jazzy bull with an athletic build. It is named after Perry Barr, the area of Birmingham where the transformed Alexander Stadium hosted the Games’ opening and closing ceremonies and athletics events

Indian Men’s Football Team(The Blue Tigers) captain Sunil Chhetri was named the 2021-2022 All India Football Federation (AIFF) Men’s Footballer of the Year for the seventh time. In the Women’s Category, Manisha Kalyan bagged her maiden award for the 2021-22 season