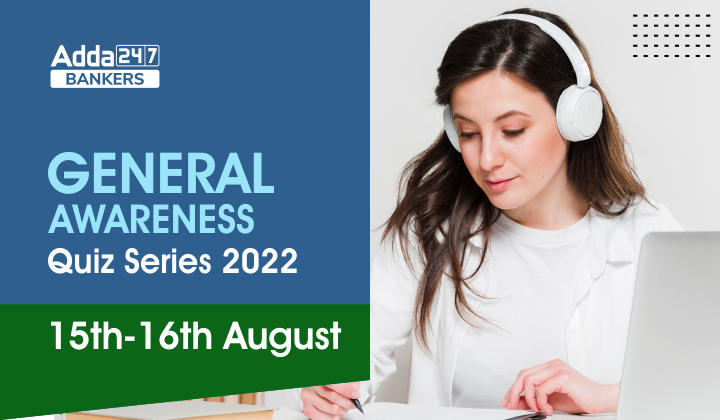 General Awareness Quiz Series 2022: 15th-16th August: Hello Students, General Awareness is an essential part of all government exams. It’s better to prepare this section daily and revise the same using the factsheet provided. Bankersadda team has brought you up a new series in which we will come up with 10 questions and answers, other options of the question have related news to them. So don’t miss reading the solutions.

Q1. Which organization unfurled the India Flag about 30 kilometers above the planet on independence day?

Q3. IMD-UNDP initiates a new project to speed up climate action in how many states?

Q4. In which year 1st Edition of the Women Indian Premier League will start?

Q5. How many Municipal Corporations are identified to implement comprehensive rehabilitation of persons engaged in the act of begging under the SMILE scheme?

Q6. Rakesh Jhunjhunwala recently passed away, He is associated with which Airline?

Q7. ‘Pradhan Mantri Awas Yojana-Urban (PMAY-U) – Housing for All was launched in which year and till which year it will be continued?

Q8. Till which year India has set a target to raise the share of natural gas in the energy mix to 15%?

Q9. According to United Nations, Conference on Trade and Development, How many percent of Indians possessed digital currency in 2021?

Q10. The International Solar Alliance (ISA) in partnership with the Republic of Cuba signed a tender for setting up an 1150 MW solar project in Cuba. Who is the project management consultant?

Space Kidz India unfurled the Indian flag about 30 kilometers above the planet on Independence Day. The flag was sent to an altitude of 1 lakh 6 thousand feet above the planet on a balloon that unfurled it. The event was part of the Azadi ka Amrit Mahotsav slogan and under the Har Ghar Tiranga campaign launched by Prime Minister Narendra Modi to celebrate the historic anniversary.

Sri Aurobindo was an Indian philosopher, yoga guru, maharishi, poet, and Indian nationalist. He was also a journalist, editing newspapers such as Vande Mataram. He was born on 15 August 1872, Kolkata.

IMD-UNDP initiates a new project to speed up climate action in 10 States and Union Territories throughout the nation has been unveiled by the IMD, the government of Japan, and the UNDP.

The 1st Edition of  Women Indian Premier League will be starting from March 2023 to be held in a one-month window and in all likelihood with five teams, a senior BCCI official confirmed.

The Ministry of Social Justice & Empowerment, Government of India, has identified 75 Municipal Corporations to implement comprehensive rehabilitation of persons engaged in the act of begging under “SMILE: Support for Marginalised Individuals for Livelihood and Enterprise” named as “SMILE-75 Initiative”.

PMAY-U, a flagship program of the Government of India implemented by MoHUA, was launched in 2015 to provide all-weather pucca houses to all eligible beneficiaries in the urban areas of the country through States/UTs/Central Nodal Agencies. It was launched with the aim to achieve housing for all by 2022.

The Union Cabinet chaired by Prime Minister (PM) of India Narendra Modi approved the proposal of the Ministry of Housing and Urban Affairs (MoHUA) for the continuation of ‘Pradhan Mantri Awas Yojana-Urban (PMAY-U) – Housing for All’ up to December 31st, 2024.

The Government of India (GoI) has set a target to raise the share of natural gas in the energy mix to 15% in 2030 from the current about 6.3%.

The United Nations Conference on Trade and Development (UNCTAD) estimated that 7.3% of the Indian population possessed digital currency in 2021, placing India 7th out of the top 20 global economies for digital currency ownership as a share of the population.

The International Solar Alliance (ISA) in partnership with the Republic of Cuba signed a tender for setting up an 1150 MW solar project in Cuba.

NTPC is the project management consultant for ISA for setting up the project.