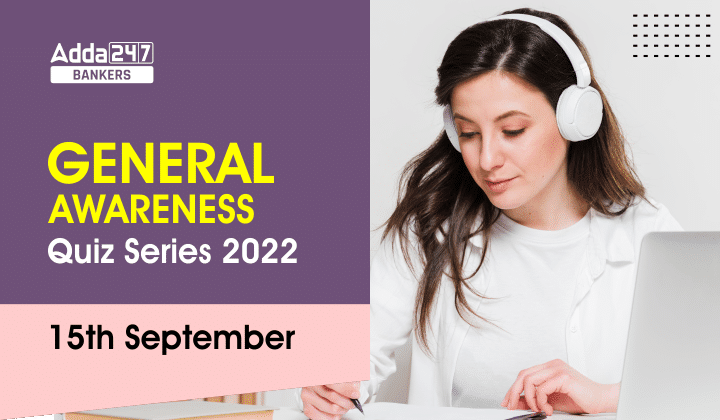 General Awareness Quiz Series 2022: 15th September: Hello Students, General Awareness is an essential part of all government exams. It’s better to prepare this section daily and revise the same using the factsheet provided. Bankersadda team has brought you up a new series in which we will come up with 10 questions and answers, other options of the question have related news to them. So don’t miss reading the solutions.

Q1. Which of the following Pairs are incorrectly matched?

Q4. Which state has topped in the Amrit Sarovar (lakes ) in India Initiatives?

Q6. Who has been named as the 14th Attorney General for India again after KK Venugopal vacates?

Q7. Where National Defense MSME Conclave and Exhibition will be held?

Q8. Which bank has become the first bank  to issue an Electronic Bank Guarantee (e-BG)?

(b) Bank of Maharashtra

Q9. 2021 Global Estimates for Modern Slavery is released by _____ which said ___ million people were living in modern slavery.

Uttar Pradesh becomes the first state in India to construct 8,642 Amrit Sarovar (Lakes) in India. Amrit Sarovar is an ambitious mission initiated by Prime Minister Narendra Modi, which aims to conserve water for the future. Madhya Pradesh is in the second position, Jammu and Kashmir in third, Rajasthan in fourth, and Tamil Nadu ranked in the fifth position.

The military camp at Kibithu Garrison, which is very close to the Line of Actual Control (LAC) in Arunachal Pradesh, has been renamed as ‘Gen Bipin Rawat military garrison’.

Army Chief General Manoj Pande recently visited the Ladakh sector to review Exercise Parvat Prahar and was briefed about the operational preparedness on the ground by the commanders. The exercise saw the deployment of an all new major induction of the Army.

The Securities and Exchange Board of India (SEBI) has given Sachin Bansal’s fintech business Navi Technologies the go-ahead for an Initial Public Offering (IPO), which will help the Flipkart co-founder in his efforts to build a financial services conglomerate.

The two-day National Defense MSME Conclave and Exhibition began on September 11, 2022 in Kota, Rajasthan. Defense equipment including T-90 and BMP-2 tanks, artillery guns, various types of sniper and machine guns and military bridges are on display at the exhibition.

The 2021 Global Estimates for Modern Slavery, which was recently released by the International Labour Organization (ILO), revealed a spike in the instances of forced labour.