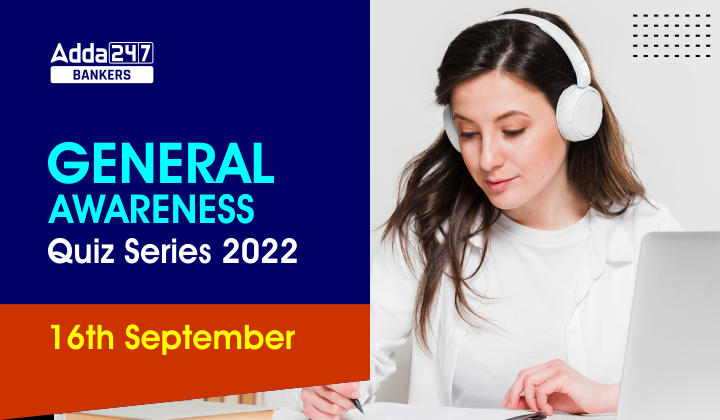 General Awareness Quiz Series 2022: 16th September: Hello Students, General Awareness is an essential part of all government exams. It’s better to prepare this section daily and revise the same using the factsheet provided. Bankersadda team has brought you up a new series in which we will come up with 10 questions and answers, other options of the question have related news to them. So don’t miss reading the solutions.

Q1. Which State/ UT has been ranked one for attracting maximum industrial investment?

Q2. Roger Federer announced his retirement. Which cup will be his last participation?

Q3.Which Indian Cricketer became the first cricketer to have 50 million follower on twitter?

Q4. Which City will be the first city to have fully digital addressing system?

Q5. With which country India has jointly published a whitepaper on ‘Urban Wastewater Scenario?

Q6. National Commission for Protection of Child Rights (NCPCR) is a statutory body constituted under which act?

(a) Protection of Children from Sexual Offences (POCSO) Act, 2012

(b) Juvenile Justice (Care and Protection of Children) Act, 2015

Q8. Where world’s largest museum of Harappan culture is going to be built?

Which of the statements is/ are correct?

Andhra Pradesh has ranked one on the list of states in attracting industrial investments in the first seven months of 2022. According to the Department for Promotion of Industry and Internal Trade (DPIIT)

Delhi Chief Minister Arvind Kejriwal launched the ‘country’s first virtual school’ called the ‘Delhi Model Virtual School’, in which students from across India will be eligible for admission in classes 9 to 12.
Ans.2.(c)

Roger Federer Retirement: One of the greatest sporting careers will come to a close when Roger Federer, 41, announces his retirement following the Laver Cup in London.

Virat Kohli has now become the first cricketer who have notched up 50 million followers on Twitter.

Rahul Sharma, an Indian spinner, has declared his retirement from both local and international cricket.

Indore to become the country’s first ‘Smart City’ with ‘Smart Addresses’: Indore will create history by implementing a fully digital addressing system, making it the first city in India to do so.

India has launched Joint Whitepaper on ‘Urban Wastewater Scenario in India’, with Denmark at World Water Congress and Exhibition 2022 in Copenhagen.

Keeping in view  the observations made by the Hon’ble Supreme Court for coordinated working of NCPCR and SCPCRs and Section 13(2) of CPCR Act, 2005, NCPCR will be providing access to all SCPCRs on the “E-Baal Nidan” portal.

Sjoerd Marijne, authored a new book titled “Will Power: The Inside Story of the Incredible Turnaround in Indian Women’s Hockey”.

A book titled “Lion of the Skies: Hardit Singh Malik, the Royal Air Force and the First World War” is all about an “India’s first fighter pilot” who participated in the World War.

The world’s largest museum of Harappan culture is coming up in Rakhigarhi in Haryana to showcase about 5,000-year-old Indus Valley artefacts.

Twitter announced the availability of Twitter Circle where users can choose who can see and engage with their tweets.
Everyone can join the public conversation on their own terms while each Circle will allow up to 150 people. After a successful test run, the feature is being rolled out across the world. People in the circle will see a green badge under Tweets sent to the group wile these Tweets cannot be retweeted

ANGAN 2.0, which is being organised by the Bureau of Energy Efficiency (BEE), Ministry of Power, in collaboration with Swiss Agency for Development & Cooperation (SDC) under the Indo-Swiss Building Energy Efficiency Project (BEEP)