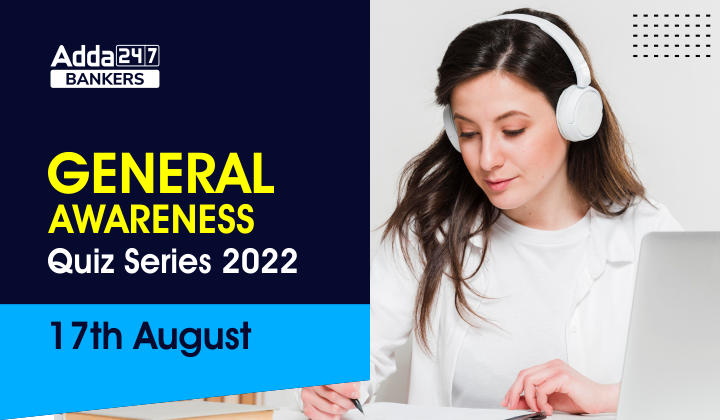 General Awareness Quiz Series 2022: 17th August: Hello Students, General Awareness is an essential part of all government exams. It’s better to prepare this section daily and revise the same using the factsheet provided. Bankersadda team has brought you up a new series in which we will come up with 10 questions and answers, other options of the question have related news to them. So don’t miss reading the solutions.

Q1. Who was the first Asian who was elected as a Member of Parliament in Britain?

Q2. Uma Pemmaraju is a journalist of indian origin, She belonged to which country?

Q3. Where 23rd edition of India International Seafood Show (IISS) will going to be held?

Q4. Who has been appointed as the CEO of NATGRID?

Q5. What are the total number of Ramsar sites present in the country?

Q6. Which of the following is not an elephant reserve in Tamil Nadu?

Q10. Meghalaya will host the 2nd edition of the North East Olympics 2022 in Shillong, It was supposed take place in which state but was cancelled due to covid?

London home of Dadabhai Naoroji will get a ‘Blue Plaque’, an honour that is reserved for notable personalities who have lived and worked in London. Naoroji was the first Asian who was elected as a Member of Parliament in Britain. The Blue Plaque scheme, run by the English Heritage charity, honours the historic significance of particular buildings across London. Naoroji’s plaque was unveiled to coincide with the 75th-anniversary celebrations of Indian Independence.

An Indian American journalist, Uma Pemmaraju has passed away at the age of 64. She

was a part of various shows such as The Fox Report, Fox News Live, Fox News Now, and Fox On Trends.

Marine Products Export Development Authority (MPEDA) in association with the Seafood Exporters’ Association of India (SEAI) will hold the 23rd edition of India International Seafood Show (IISS) in Kolkata, the City of Joy

Piyush Goyal has been appointed by the Central Government as the new CEO of NATGRID (National Intelligence Grid).

India has added 11 more wetlands to the list of Ramsar sites to make a total of 75 such sites covering an area of 13,26,677 hectares in the country. 75 Ramsar Sites in 75th Year of Independence India.

The theme for the Top 500 Companies 2022 publication is ‘ESG: The only way for sustainable and responsible growth

World Organ Donation Day is annually observed on 13th of August to raise awareness of the need for donating organs and to thank donors for their life-saving contributions.

International Lefthanders Day is annually celebrated on 13 August to mark the uniqueness of the left-handed people around the world.

In 2018, Manipur hosted the first edition of North East Olympics Games, which featured 12 disciplines. The second edition was supposed to take place in Arunachal Pradesh, but it was cancelled due to the COVID19 pandemic.