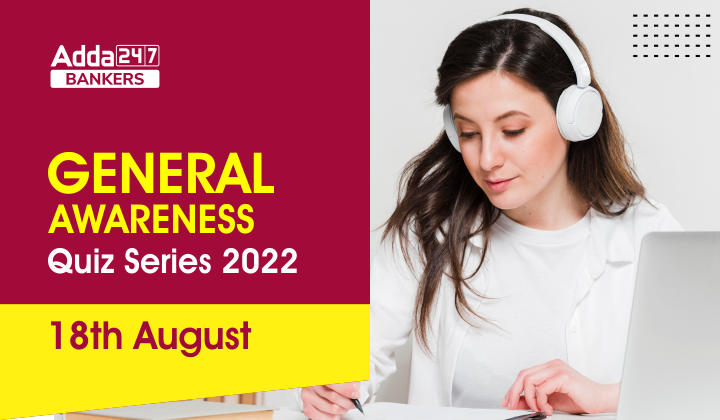 General Awareness Quiz Series 2022: 18th August: Hello Students, General Awareness is an essential part of all government exams. It’s better to prepare this section daily and revise the same using the factsheet provided. Bankersadda team has brought you up a new series in which we will come up with 10 questions and answers, other options of the question have related news to them. So don’t miss reading the solutions.

Q1. What is the name of India’s first Saline water Lantern ?

Q2. India has contributed four lakh US dollars to four Voluntary Trust Funds as part of its commitment to global promotion and protection of human rights. Which of the following is not one of them?

(a) the Voluntary Fund for Victims of Torture

(b) Voluntary Fund for Technical Cooperation

Q3. Which public sector company has signed an agreement with NTCA to contribute Rs 50 crore as a part of corporate social responsibility (CSR) funds to Project Cheetah?

Q4. In which year Aspirational Districts programme was launched?

Q5. The Sultan Azlan Shah Cup 2022 is associated with which game?

Q6. What is the total number of non-official directors in RBI central board?

Q7. The Indian Olympic Association has been directed by the Delhi High Court to set up a three-member Committee of Administrators(CoA) to take over its affairs. Which of the following is not the consultant sportsman?

Q8. Researchers in Hyderabad have successfully 3D-printed an artificial cornea (3D-printed Human Cornea) and placed it in a rabbit eye for the first time ever in India. Which of the institution are part of the project?

Q9. Who has been appointed as the new Executive Secretary of the UN Framework Convention on Climate Change (UNFCCC)?

Q10. Lumpy Skin Disease affects which of the following?

India has contributed four lakh US dollars to four Voluntary Trust Funds as part of its commitment to global promotion and protection of human rights and support for United Nations Human Rights.

The Indian Oil Corporation will, over a span of four years, contribute Rs 50 crore as part of its corporate social responsibility (CSR) funds to Project Cheetah, which aims to introduce the African cheetah in India.

The deal was inked on August 2, with the IOC signing a Memorandum of Understanding (MoU) to this effect with the National Tiger Conservation Authority (NTCA), which is overseeing Project Cheetah.

Launched by the Hon’ble PM in January 2018, the Aspirational Districts programme aims to quickly and effectively transform 112 most under-developed districts across the country. The broad contours of the programme are Convergence (of Central & State Schemes), Collaboration (of Central, State level ‘Prabhari’ Officers & District Collectors), and Competition among districts through monthly delta ranking; all driven by a mass movement.

Malaysia’s premier men’s hockey tournament, the Sultan Azlan Shah Cup 2022 will be held from November 16 to 25 in Ipoh.

The Reserve Bank’s affairs are governed by a central board of directors. The board is appointed by the Government of India in keeping with the Reserve Bank of India Act.

Satish Kashinath Marathe, Swaminathan Gurumurthy, Revathy Iyer, and Sachin Chaturvedi have all been renominated by the national government to serve as part-time, non-official directors on the RBI’s central board or central board of the Reserve Bank of India.

The Indian Olympic Association has been directed by the Delhi High Court to set up a three-member Committee of Administrators(CoA) to take over its affairs. According to PTI, the court took the decision after the IOA’s “persistent recalcitrance” to comply with the Sports Code.

Researchers in Hyderabad have successfully 3D-printed an artificial cornea (3D-printed Human Cornea) and placed it in a rabbit eye for the first time ever in India. A 3D-printed Human cornea made from human donor corneal tissue has been created by researchers from the L V Prasad Eye Institute (LVPEI), Indian Institute of Technology-Hyderabad (IIT-H), and the Centre for Cellular and Molecular Biology (CCMB).

William Ruto is now the country’s president-elect after he was declared the winner of the last presidential election.

Lumpy Skin Disease (LSD) disease is caused by a virus called the Capripoxvirus and is “an emerging threat to livestock worldwide”. It is genetically related to the goatpox and sheeppox virus family.

Over the last few weeks, nearly 3,000 cattle have died in Rajasthan and Gujarat due to a viral infection called the Lumpy Skin Disease (LSD) that has spread across the states.