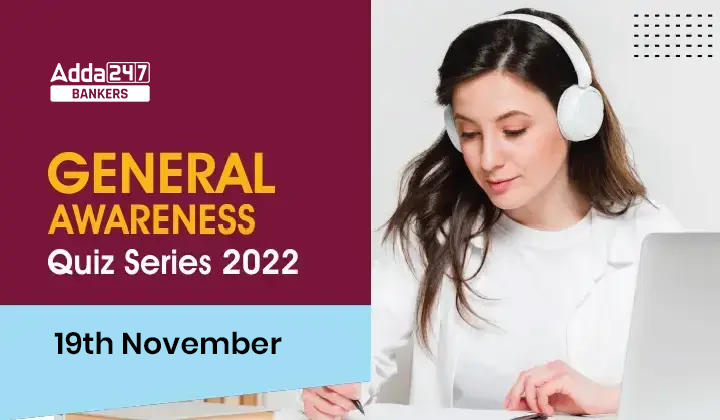 General Awareness Quiz Series 2022: 19th November: Hello Students, General Awareness is an essential part of all government exams. It’s better to prepare this section daily and revise the same using the factsheet provided. Bankersadda team has brought you up a new series in which we will come up with 10 questions and answers, other options of the question have related news to them. So don’t miss reading the solutions.

Q1. Which Indian Sportsman has been appointed as the “Friendship Ambassador” of Switzerland?

Q2. Global action for Reconciling Economic growth and Environmental preservation (GREEN) initiative is of Which Bank?

Q3. When World Day for the Prevention of and Healing from Child Sexual Exploitation will be celebrated?

Q5. Which Indian company is the first company to have European Works Council?

Q6. How much amount of loan agreement with German Development Bank KfW has been signed for Solar Projects?

Q7. Uttarakhand High Court has been shifted to which city from Nainital?

Q8. Who has been appointed as the chairman of ONGC?

National Investment and Infrastructure Fund (NIIFL) has signed a Memorandum of Understanding (MOU) with Japan Bank for International Cooperation (JBIC) to promote and enhance Japanese investments into India.

The UN General Assembly  has declared November 18 as the World Day for the Prevention of and Healing from Child Sexual Exploitation, Abuse, and Violence.

Public Service Broadcasting Day is being celebrated on 12th November every year to commemorate the only visit of Mahatma Gandhi to All India Radio in Delhi in 1947.

World Pneumonia Day is a global event observed every year on 12 November to spread awareness and educate people to combat Pneumonia disease.

Vikram-S Rocket, India’s first privately developed rocket launched from the Indian Space Research Organization (ISRO) at the Sriharikota launchpad. The launch of Vikram-S Rocket by ISRO is a historic moment.

IT company Wipro has reached an agreement with employee representatives on setting up a European Works Council, the company said. The creation of Wipro’s EWC is the first to be established by an Indian headquartered company.

The Uttarakhand High Court will be shifted from Nainital to Haldwani. This decision was taken in a cabinet meeting held under the chairmanship of Chief Minister Pushkar Singh Dhami in Dehradun.

Facebook-parent Meta has appointed Sandhya Devanathan as its new top executive for the country two weeks after the departure of former India head Ajit Mohan.

Switzerland won their first Billie Jean King Cup title after Belinda Bencic saw off Australia’s Ajla Tomljanovic in the second match of the finals with a lead of 2-0. Jil Teichmann had earlier prevailed 6-3 4-6 6-3 over Storm Sanders last year.