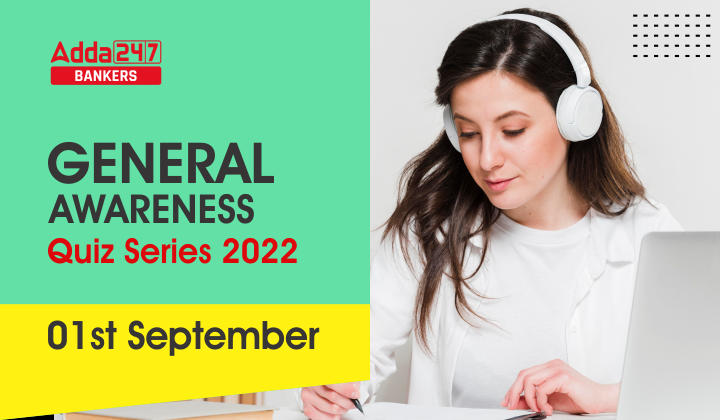 General Awareness Quiz Series 2022: 1st September: Hello Students, General Awareness is an essential part of all government exams. It’s better to prepare this section daily and revise the same using the factsheet provided. Bankersadda team has brought you up a new series in which we will come up with 10 questions and answers, other options of the question have related news to them. So don’t miss reading the solutions.

Q1. Rural Olympic games will be inaugurated in which state?

Q2. Which of the day is celebrated on 30 August?

Q3. Which defence service is getting a new logo which will be unveiled on 2 September?

Q4. Abhijit Sen passed away recently, he was realted which field?

(b) Science and technology

Q5. Who is the last leader of Soviet Union who died recently?

Q6. The Ministry of Social Justice and Empowerment (MoSJE), Government of India (GoI), established the first “Divyang Park at which place?

Q7. Which government signed Memorandum of Understanding (MoU) with the United States (US)-based Parley for the Oceans, to clean the shores of the State?

Q8. Samvatsari is the festival of which religion?

Q9. “One Herb, One Standard “ Campaign started by?

(a) Ministry of Tribal Affairs

(b) Ministry of Forest and Climate Change

Rajasthan chief minister Ashok Gehlot inaugurated a month-long Rajiv Gandhi Rural Olympic Games in Jodhpur. The village Olympics is expected to see the participation of 44,000 villages across Rajasthan, with nearly 30 lakh people across various age groups already registering themselves for the games. Out of the 30 lakh participants, 9 lakh are women.

Prime Minister Narendra Modi, on Friday, September 2, will unveil a new ensign (flag) of the Indian Navy during the commissioning of the country’s first indigenously-built aircraft carrier INS Vikrant in Kochi.

The new naval ensign (Nishaan) to be launched at Cochin Shipyard Limited will do away “with the colonial past,” and will be “befitting the rich Indian maritime heritage,” the PMO said.

What is the significance of the new naval ensign?

PM Modi will unveil the new naval ensign that will replace the current flag that has Saint George’s Cross with the tricolour in the top left corner.

The Saint George’s Red Cross in the Indian Navy’s ensign is named after the Christian warrior Saint George, who is believed to have been a crusader during the third crusade. The Cross of Saint George is a red cross on a white background

Renowned economist and former Planning Commission member, Abhijit Sen has passed away at 72.

Mikhail Gorbachev, who as the last leader of the Soviet Union waged a losing battle to salvage a crumbling empire but produced extraordinary reforms that led to the end of the Cold War, died.

The Ministry of Social Justice and Empowerment (MoSJE), Government of India (GoI), established the first “Divyang Park” for Divyangjan’ under theAssistance to Disabled Persons (ADIP) Scheme of MoSJE at Reshimbagh Ground in Nagpur, Maharashtra.

The Government of Uttar Pradesh (UP) has decided to develop Kannauj as a perfume tourism destination.

Government of Andhra Pradesh has signed a Memorandum of Understanding (MoU) with the United States (US)-based Parley for the Oceans, to clean the shores of the State and make Andhra Pradesh plastic free by 2027.

Saṃvatsari ritual observed on the last day of Paryushana Shwetambar sect of Jainism. It falls on Shukla Panchami each year in the Jain calendar month of Bhadrapada, somewhere between the middle of August and September in the Gregorian calendar.

Ministry of Ayush has taken a significant step to achieve “One Herb, One Standard”. A Memorandum of Understanding (MoU) was signed between Pharmacopoeia Commission for Indian Medicine and Homoeopathy (Ministry of Ayush) and Indian Pharmacopoeia Commission (Ministry of Health & Family Welfare) today in New Delhi for Inter-Ministerial cooperation for promotion and facilitation of “One Herb, One Standard”.

The Ministry of Coal has set an ambitious goal for coal companies to bring more than 2400 hectare of area in and around coalfields under green cover with plantation of more than 50 lakh saplings for the year 2022-23.