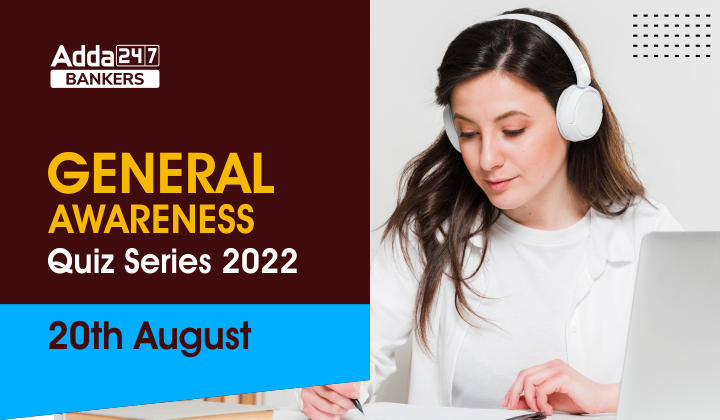 General Awareness Quiz Series 2022: 20th August: Hello Students, General Awareness is an essential part of all government exams. It’s better to prepare this section daily and revise the same using the factsheet provided. Bankersadda team has brought you up a new series in which we will come up with 10 questions and answers, other options of the question have related news to them. So don’t miss reading the solutions.

Q2. On which river The national mission for clean Ganga and Jal Shakti ministry celebrated the Azadi ka Amrit Mahotsav?

Q4. Which country has mandated by law to provide free sanitary products like tampons and  pads ?

Q5. In which state all the villages became har ghar jal village?

Q6. Make India No 1 Campaign is launched by

(a) Central Government of India

(b) State Government of Delhi

Q7. What are the venue of FIBA U-18 women’s Asian Basketball Championship

Q9. According to China’s defence ministry, The People’s Liberation Army of China will participate in “Vostok-2022 strategic command and staff exercise”. This exercise going to take place in which country?

Q10. Which city has the highest average level of fine PM 2.5 among the world’s most populated cities, as per HEI’s recent report?

‘Dahi-Handi‘ was recognized as an official sport of Maharashtra. The Maharashtra government also announces to soon organize a ‘Pro-Dahi Handi” event.

The Border Road Organization (BRO) will build Steel Slag Road in Arunachal Pradesh based on the Pilot project. The Steel Slag Road is the first of its kind Project which aims to make durable roadways that can withstand heavy rain and adverse climatic conditions.

The people of all the villages in Goa and Dadra & Nagar Haveli and Daman & Diu (D&NH and D&D) declared their village to be a “Har Ghar Jal” through a resolution passed by the Gram Sabha, certifying that all households in the villages have access to safe drinking water through taps and ensuring that “No One is Left Out.”

Delhi Chief Minister, Arvind Kejriwal has formally unveiled his Aam Aadmi Party’s national ambition with the launch of the ‘Make India No 1’ campaign. he proposed a five-point vision for good governance

Ramadhar Singh becomes the first Indian Social Psychologist on the US Heritage Wall of Fame of the Society for Personality and Social Psychology (SPSP) in the United States.

According to China’s defence ministry, The People’s Liberation Army of China will participate in “Vostok-2022 strategic command and staff exercise” which is scheduled to take part in Russia. Armies of India, Tajikistan, Mongolia and Belarus will also take part in the exercise.

The Vostok 2022 strategic command and staff exercise will take place from August 30 to September 5, 2022.

‘Air Quality and Health in Cities’ report was released by US-based Health Effects Institute (HEI). It provides analysis of air pollution and global health effects for over 7,000 cities around the world, focusing on fine particulate matter (PM2.5) and nitrogen dioxide (NO2).
As per the report, India is home to 18 of the 20 cities with the most severe increase in fine particle pollutants (PM2.5) from 2010 to 2019. Delhi has the highest average level of fine PM 2.5 among the world’s most populated cities