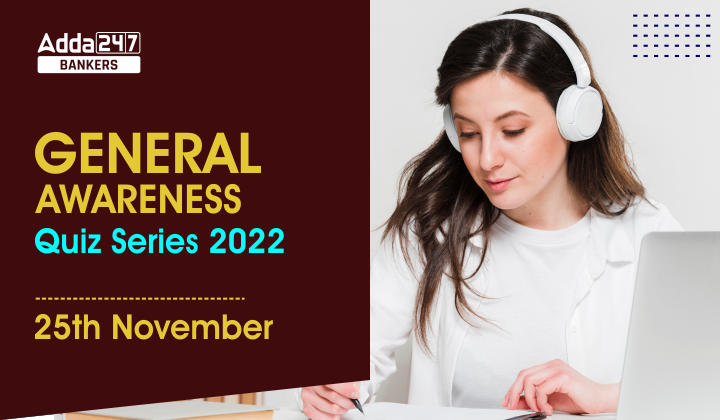 General Awareness Quiz Series 2022: 25th November: Hello Students, General Awareness is an essential part of all government exams. It’s better to prepare this section daily and revise the same using the factsheet provided. Bankersadda team has brought you up a new series in which we will come up with 10 questions and answers, other options of the question have related news to them. So don’t miss reading the solutions.

Q1. Garuda Shakti is a military exercise between which countries?

(a) India and Bangladesh

(b) India and Indonesia

Q3. Who has been felicitated by the Lifetime Achievement Award 2022’ at the 8th FICCI Higher Education Excellence Awards ceremony.

Q4. Which of the following days is celebrated on 25th November?

(a) International Day for the Elimination of Violence against Women

Q5. Which bank has the largest share in debit cards market?

Q6. RH200, the versatile sounding rocket of ISRO registered its 200th consecutive successful launch from the shores of Thumba, Thiruvananthapuram. What does R stands for ?

Q7. Which of the following satellites is incorrectly matched with its company?

Q9. Who has been appointed as the new Chairman of the All India Council for Technical Education (AICTE)?

Q10. Lachit Barphukan is related to which dynasty?

Prodapt has been named a recipient of the Salesforce Partner Innovation Award in the “Communications” category.

The Ministry of Youth Affairs and Sports, Government of India announced the National Adventure Award called “Tenzing Norgay Adventure Award” (TNNAA) for the year 2021. The award is given in four categories which are Land Adventure, Water Adventure, Air Adventure, and Life Time Achievement.

The International Day for the Elimination of Violence against Women is observed on November 25, every year.

Guru Tegh Bahadur was the ninth Sikh Guru and second Sikh martyr, who sacrificed his life for religion and for the protection of the human rights. The martyrdom day of Guru Tegh Bahadur is celebrated every year on November 24.

World Television Day is observed on 21 November, every year. It is a day that recognizes the value and impact of television in our lives.

Country’s largest lender, State Bank of India continues to dominate the debit cards market in October 2022, with a 29% share. Compared to last month the share was slightly less, where SBI led the debit card market by 30 per cent in September.

RH200, the versatile sounding rocket of ISRO registered its 200th consecutive successful launch from the shores of Thumba, Thiruvananthapuram. The Indian Space Research Organisation (ISRO) termed it a “historic moment”. It was witnessed by former President Ram Nath Kovind and ISRO chairman S Somanath, among others. Rohini Sounding Rocket (RSR) series : RH-200 is a two-stage rocket capable of climbing to a height of 70 km bearing scientific payloads. 200 stands for the diameter of the rocket.

The Indian Space Research Organization is set to launch PLV-C54/EOS-06 Mission with Oceans-3 and eight nanosatellites on board from Sriharikota spaceport. The PLV-C54/EOS-06 Mission includes EOS-06 (Oceans-3), plus eight nanosatellites which are BhutanSat, ‘Anand’ from Pixxel, Thybolt two numbers from Dhurva Space and Astrocast-four numbers from Spaceflight USA.

The Army Red Team has won the 72nd Inter Services Volleyball Championship 2022-23. The Army Red team emerged victorious with a set score of 3-1.

Professor TG Sitharam, Director of the Indian Institute of Technology Guwahati (IIT Guwahati) has been appointed as the new Chairman of the All India Council for Technical Education (AICTE).

The 3-day long celebrations of the 400th birth anniversary of Ahom commander Lachit Barphukan began in New Delhi. Union Finance minister Nirmala Sitharaman inaugurated the exhibition on the occasion highlighting the life and achievement of the Ahom dynasty and Lachit Barphukan among others.