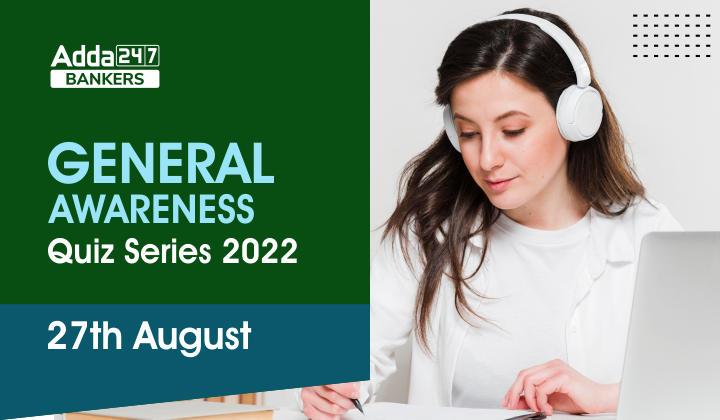 General Awareness Quiz Series 2022: 27th August: Hello Students, General Awareness is an essential part of all government exams. It’s better to prepare this section daily and revise the same using the factsheet provided. Bankersadda team has brought you up a new series in which we will come up with 10 questions and answers, other options of the question have related news to them. So don’t miss reading the solutions.

Q2. Match the following the chairmans with respective organization

Q3. Who has been appointed as the Executive Director for India at the International Monetary Fund (IMF)?

Q5. The Pinaka extended range rocket trials were carried out in firing ranges of Pokhran, Rajasthan. Pinaka was developed by ?

Q6. India’s first 3D-printed post office is slated to come up in which state?

Q7. Village Defence Guards Scheme 2022 by central government (VDGS-2022) is for which state?

(d) All over the country

Q8.Khadi Utsav and Atal Bridge is on which river front ?

Q10. Under which Chief Justice of India, Supreme Court Live proceedings were streamed ?

The Competitiveness Roadmap for India@100 will be unveiled in New Delhi by the Economic Advisory Council to the Prime Minister (EAC-PM).

The Pinaka extended range rocket trials developed by the Defence Research and Development Organization (DRDO) were carried out in firing ranges of Pokhran, Rajasthan.

India’s first 3D-printed post office is slated to come up in Bengaluru, Karnataka and will cost around one-fourth of the amount spent on a traditional building.

Village Defence Guards Scheme 2022 (VDGS-2022), is a programme with a defence component that was only recently introduced for the state of Jammu & Kashmir (J&K)

Khadi Utsav to be held on Sabarmati Riverfront in Ahmedabad. From the same venue, the PM will inaugurate the pedestrian-only ‘Atal Bridge” on the Sabarmati river in Ahmedabad city today.

Country’s first indigenously-built aircraft carrier (IAC) Vikrant is to be commissioned on September 2.

Prime Minister Narendra Modi will be the chief guest at the commissioning of the Indigenous Aircraft Carrier Vikrant in Kochi. Navy Vice Admiral S N Ghormade said,  for the Vikrant, the equipment has been made in 18 states and union territories including places like Ambala, Daman, Kolkata, Jalandhar, Kota, Pune, and New Delhi.

The Supreme Court today called for an expert committee and an all-party meeting to discuss on freebies. The order was live-streamed in a historic first to mark outgoing Chief Justice N V Ramana’s last day. The freebies case was among 20 hearings streamed for the first time from the Chief Justice’s court.