Directions (1-5): Study the following information carefully and answer the given questions:
Eight persons C, D, H, J, M, P, R and T are sitting in a straight line equidistant from each other, but not necessarily in the same order. Some of them are facing South while some are facing North. D does not face north. Only two persons sit to the left of J. R sits third to the right of J. Only one person sits between R and T. T sits to the immediate left of H. Only one person sits between H and M. Both the immediate neighbors of R face the opposite direction to each other. C sits third to the right of T. R faces the same direction as J. P does not sit at any of the extreme ends of the line. D faces the opposite direction to H. Both P and C face the same direction as M. 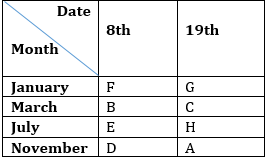