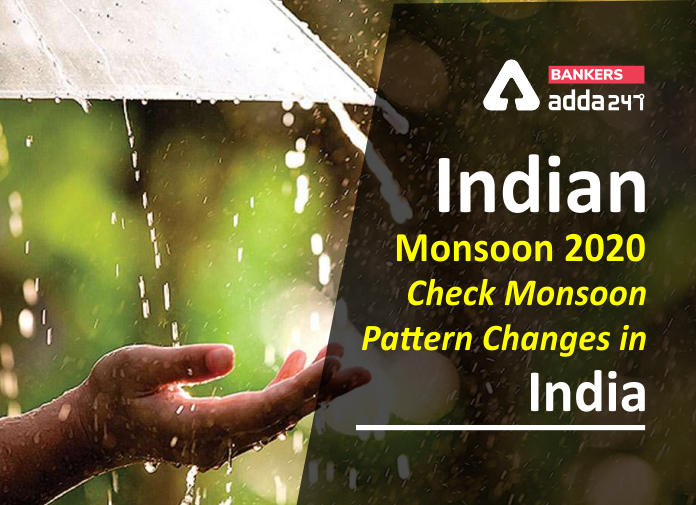 Indian Monsoon 2020: In India, we experience different climatic conditions in different regions due to the vast differentiation in the geographical conditions across the country and so it happens with the monsoon. Monsoon is the word which aptly describes the rainfall system in India and it is the seasonal reversal of winds which blows from the northeast during cooler months and from the southwest during warmer months of the year. Due to this process, there are heavy rainfalls from June to September in some of the regions of the country. Let us understand the distribution of rainfall or monsoon in India. This article includes everything about the distribution pattern of Monsoon and the changing trend of Monsoon in India.

India follows the monsoonal type of climate and monsoon plays a significant role in the economy of India as rainfall is the backbone of Indian agriculture activities. Agriculture contributes hugely into the upliftment of Indian economy and agriculture majorly depends upon monsoon. Therefore, indirectly Monsoon is important for feeding the population and contributing to the economy of the country. The average rainfall in India has been recorded as 118 cm which could be divided into 5 regions on the basis of rainfalls they receive as described below:

Areas receiving moderate rainfall: The areas experiencing average annual rainfall of 100-200 cm are classified as moderate precipitation regions in India. The areas receiving moderate rainfall in India are parts of Bihar, Orissa, West Bengal, Andhra Pradesh, Madhya Pradesh, leeward side of western ghats. These areas are well-known as natural vegetation regions of India which is comprised of Wet deciduous forests

Areas receiving lowest rainfall: The areas experiencing average annual rainfall lesser than 50 cm are classified as desert or semi-desert regions in India. The regions receiving lowest rainfall are parts of Rajasthan, Gujarat and some adjacent areas, these are classified as desert or semi-desert due to the lesser amount of rainfall in these areas. Ladakh plateau is also included in this zone and well known with the classification of cold deserts. The vegetation grown in these areas has consisted of hardy species which can easily withstand extended droughts and lesser rainfall. The lowest rainfall in India is received in Ruyli village, Rajasthan.

The following data is as per the Meteorological Department of India’s press release published on the official website @mausam.imd.gov.in stating “Intense rainfall spell over Northern and Northeastern parts of India during 18th-21st July, 2020”

The alteration in weather patterns and its impact on the crops and food security can be accessed by overviewing at the trends of the past 15 years, today, and maximum 15 days into the future. Due to the warming of the surface of the Arabian sea which has reached a depth of 100 m, there could be an impact on the monsoon in India and could lead to the favourable conditions of cyclonic storms. In 2019, 5 cyclones were recorded in the Arabian Sea. The onset of Northwest monsoon is affected due to the delay in the withdrawal of Southwest monsoon.

Q- How Monsoon have an impact on the Indian economy?

A- Monsoon has a vast impact on the increasing the Indian economy as our agricultural system is very much dependant on the monsoon rainfall almost in all parts of the country.

Q- How Monsoon is classified?

A- Monsoon can be classified into 2 periods:

Q- Which region of India experiences the highest rainfall?

A- Mawsynram village of Meghalaya has highest rainfall not only in India but in the world also.

Q- Which region of India experiences the lowest rainfall?

A- Ruyli region in Rajasthan has been recorded with the lowest rainfall in India.

Q- How the average rainfall is calculated?

A- Average rainfall of any region is calculated on the basis of the data of rainfall from longer-period.