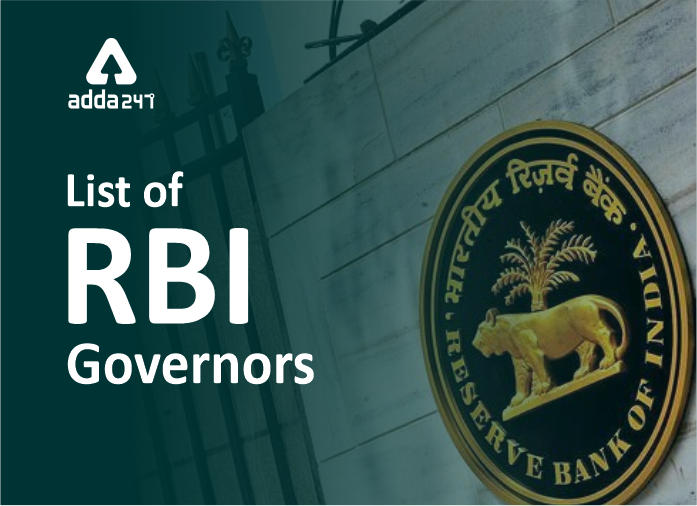 Since its establishment in 1935 by the British colonial government, the RBI has been headed by 25 governors so far. In this article, we will be discussing everything related to RBI governor like roles and responsibilities, How a governor is appointed and also facts related to RBI governors. The position is currently held by Shaktikanta Das, who took over from Urijit Patel. Students who are preparing for banking exams are advised to go through this list as questions can be asked in the GA section from this as well and this list will be helpful for you in your interview preparation also.

How the Governor of RBI is Appointed?

Role And Responsibility Of RBI Governor

One of the most important functions of the RBI governor is in formulating policies that can enable him to make a positive impact on the economy of India. Given below are some of the important responsibilities that the RBI governor takes into account:

Sir Osborne Smith, a professional banker was the first Governor of the Reserve Bank. Before coming to India he had more than 30 years of experience in the banking sector as he served for over 20 years with the Bank of New South Wales & 10 years with the Commonwealth Bank of Australia. In India, he was given the position of the Managing Governor of the Imperial Bank of India in 1926.

Sir James Braid Taylor held the positions of Deputy Controller, later as Controller of the Currency and secretary in the Finance Department before becoming the second governer.

He was known to be closely associated with the preparation and piloting of the Reserve Bank of India Bill also the decision to break away from silver currency to fiat money.

Chintaman Dwarkanath Deshmukh was the First Indian Governor of RBI. He was also a member of the Indian Civil Service. As per the information on RBI’s website “During his tenure as Governor, he represented India at the Bretton Woods negotiations in 1944, saw the transition to Independence and the partition of the country and the division of the assets and liabilities of the Reserve Bank between India and Pakistan.”

Sir Benegal Rama Rau is known to be the longest serving Governor of the Bank. He also served as the Indian Ambassador to the United States.

Before being appointed as Governor K G Ambegaonkar served as Finance Secretary and was also a member of the Indian Civil Services. He is known to have forged closer connections amongst many agricultural enterprises and RBI’s operations. KG Ambegaonkar did not sign any banknotes.

H V R Iengar also served as the Chairman of the State Bank of India for a brief period before being appointed as the Governor of the Reserve Bank. During his tenure deposit Insurance for bank deposits was introduced in 1962 which made India as one of the earliest countries to experiment with Deposit Insurance. In aspect of monetary policy, the variable cash reserve ratio was used for the first time as were the selective credit controls.

He was a member of the Indian Audit and Account Service, served as Secretary- Finance Ministry. He was also later appointed as Chairman of the State Bank of India. After serving in these roles he became the Governor of RBI. Some of the developments that took place in his tenure included the introduction of the Credit Authorisation Scheme as an instrument of Credit Regulation, the devaluation of the Rupee in 1966, with a package of measures including import liberalization and elimination of export subsidies.

B N Adarkar was a professional economist and held the post of Governor during the interregnum till S Jagannathan could take over for the post. He served as Economic Adviser of the Government of India and also held important positions in the Ministry of Commerce & Industry.

N C Sen Gupta was appointed Governor for three months till K R Puri could assume office. He was earlier working as Secretary to the Department of Banking of the Ministry of Finance.

During the tenure of K R Puri the RRBs- Regional Rural Banks were set up. Prior to his appointment as the Governor in RBI he served as the Chairman and Managing Director of the Life Insurance Corporation of India

As per the RBI’s website “M Narasimham was the first and so far the only Governor to be appointed from the Reserve Bank cadre, having joined the Bank as a Research Officer in the Economic Department. He later joined the Government and prior to his appointment as Governor he served as Additional Secretary, Department of Economic Affairs.”

Dr. I G Patel joined the RBI as Governor after serving as Secretary in the Ministry of Finance and thereafter at the United Nations Development Programme. During his tenure six private sector banks were nationalised, targets for priority sector lending introduced, and the Deposit Insurance and Credit Guarantee Corporations were merged, and a Departmental reorganisation was undertaken in the Bank.

Dr. I G Patel is known to have played an active role in availing of the IMF’s Extended Fund Facility in 1981 which represented the largest arrangement in IMF’s history at the time.

Dr Manmohan Singh served as Secretary Finance as well as Member Secretary of the Planning Commission prior to his appointment as Governor. His tenure saw new introductions to the Reserve Bank of India Act and the Urban Banks Department was set up.

A Ghosh was appointed as the Governor for a brief period of 15 days till R N Malhotra could take over. He was the Deputy Governor of RBI.

R.N. Malhotra was member of the Indian Administrative Service before joining the RBI as Governor, he was Secretary, Finance and Executive Director of the IMF.

S Venkitaramanan served as Finance Secretary and adviser to the Government of Karnataka prior to his appointment as Governor. His term is known for India adopting the IMF’s stabilization program where the Rupee underwent a devaluation and the launch of the program of economic reforms.

Dr. C Rangarajan served as the Deputy Governor for over a decade before becoming the Governor of RBI. He was also a member of the Planning Commission and a member of the Tenth Finance Commission. As per the Official RBI website- “New institutions and instruments were introduced and changes in exchange rate management culminated in the establishment of a unified exchange rate. In the field of monetary policy, his tenure saw the historic memorandum signed between the Bank and the Government whereby a cap was put on the automatic finance by the Bank to the Government in the form of ad hoc treasury bills.”

Before becoming the Governor of the Reserve Bank of India Dr. Bimal Jalan was Chief Economic Advisor to Government of India, Banking Secretary, Finance Secretary, Member Secretary of Planning Commission, and Chairman of the Economic Advisory Council to the Prime Minister prior to being appointed as Governor. His tenure is known for strengthning of the balance of payments and forex position,low inflation and soft interest rates.

Dr. Raghuram Rajan was the 23rd Governor of the Reserve Bank of India and before this he served as Chief Economic Advisor, Ministry of Finance, Government of India and the Eric J. Gleacher Distinguished Service Professor of Finance at the University of Chicago’s Booth School. Between 2003 and 2006, Dr. Rajan was the Chief Economist and Director of Research at the International Monetary Fund. Following are Books written by him:

Dr. Urjit R. Patel served as Deputy Governor before becoming the Governor of RBI. He also worked with several central and state government high level committees, including the Task Force on Direct Taxes (Kelkar Committee), the High Level Expert Group for Reviewing the Civil & Defence Services Pension System, the Prime Minister’s Task Force on Infrastructure, the Group of Ministers on Telecom Matters, the Committee on Civil Aviation Reforms and the Ministry of Power’s Expert Group on State Electricity Boards.

Also read; How To Tackle The Unemployment Challenge In India?-Decreasing Bank Vacancies

Shri Shaktikanta Das is retired IAS former Secretary, Department of Revenue and Department of Economic Affairs, Ministry of Finance, Government of India assumed charge as the 25th Governor of the Reserve Bank of India effective December 12, 2018. Immediately prior to his current assignment, he was acting as a Member, 15th Finance Commission, and G20 Sherpa of India. He has represented India in international fora like the IMF, G20, BRICS, SAARC, etc.

2. The Governor of the Reserve Bank of India who worked for the shortest time was Amitabh Ghosh. He was head of RBI for 20 days from 15 January 1985 to 4 February 1985.

3. RBI is not a Commercial Bank unlike other banks in the country.

5. KJ Udeshi was the First women deputy Governor of RBI.

6.RBI has launched a website named www.paisaboltahai.rbi.org.in. to raise awareness among masses about fake notes in the market and the ways how they can prevent themselves from getting into this web.

7. Currency notes issued by RBI have 15 languages printed on them.

8. RBI is a member of IMF (International Monetary Fund).

9. The Government of India is responsible for minting of coins and printing of 1 rupee notes and not RBI.