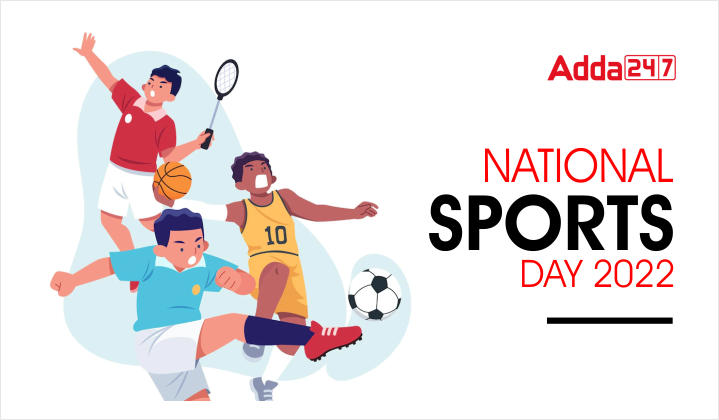 On National Sports Day National Sports Awards are given to the athletes for their contributions and for making the country proud. Sport is a form of exercise that keeps an individual physically and mentally healthy. The activities related to sports are much essential in our everyday life to keep the body healthy and fit. In this article, we have mentioned the History, and Significance, of National Sports Day 2022.

To commemorate the birth anniversary of Major Dhyan Chand National Sports Day 2022 is observed in India. Major Dhyan Chand was born on 29th August 1905 in Prayagraj, Uttar Pradesh, as Dhyan Singh. In 1922, Dhyan Chand joined Indian Army and worked as a soldier. In 1956 he retired from the Indian Army upholding the rank of a Major. He practiced Hockey at night in the moonlight so he was renamed as, Dhyan Chand.

Dhyan Chand is considered as the greatest Hockey Player and he is entitled with the title of “Hockey Wizard”. In his entire International career of Hockey he secured more than 400 goals. India achieved the first hat-trick of winning Olympic Gold medals in 1928, 1932, and 1936 Summer Olympics in which Major Dhyan Chand played a very important role.

The third highest civilian honor of India Padma Bhushan was awarded to Dhyan Chand in 1956. He took the last breath on December 3, 1979.  In 1979, after his death the Indian Postal Department paid their respect to Major Dhyan Chand by renaming the National Stadium of Delhi as Major Dhyan Chand Stadium, Delhi.

National Sports Day is commemorated to enhance sporting activities in India. Every individual, either younger or older should inculcate sports in their everyday life as it has many health related advantages. Sporting events and seminars are organized in states like Karnataka, Haryana, Punjab, and many others, through which awareness is spread among the public about the importance of including sports in day-to-day life.

Different schemes related to sports are announced by the Government of India on National Sports Day. One such scheme known as Khelo India Movement was launched in 2018 by the honorable Prime Minister of India, Narendra Modi. On National Sports Day the President of India gives away major sports awards such as Major Dhyan Chand Khel Ratna Award, Arjuna Award, and Dronacharya Award at the Rashtrapati Bhavan.

Q.1 Whose Birth Anniversary is observed as National Sports Day?

Ans. National Sports Day was first celebrated in the year 2012.