Directions (1-5): Study the information carefully and answer the questions given below.
Thirteen people live in a building consisting of nine floors. Not more than three people live on any of the floor. The ground floor is numbered one and so on till the topmost floor numbered nine. The top and the ground floor is not vacant. H lives above D and lives with at least one person on the same floor. C lives below G but not below to H. F and J live just above the odd vacant floor. Six floors are between the floors on which E and B live. No one lives with E. Four persons live between G and D. A lives with only M and on one of the odd numbered floor above B. Three persons live between J and B. K and L live on the same even numbered floor. C lives above J. E lives above B. Only one floor is vacant between the floors on which M and F live. I lives just above the even vacant floor, which is above the odd vacant floor. H lives above F’s floor.

Directions (8-10): Study the following information carefully and answer the given questions.
There are nine members in a family- A, B, C, D, E, F, G, H and I. Among them only three married couples and only four males and three generations in this family. C is married to A. B is the only child of D. A is father of E’s mother and G. F is married and she has a mother-in-law. D is paternal grandmother of E. I is the granddaughter of H who is parent of brother-in-law of G. E is a male member.

Directions (11-13): In each question below is given a statement followed by three assumptions numbered I, II and III. You have to consider the statement and the following assumptions, decide which of the assumption is followed and choose your answer accordingly. 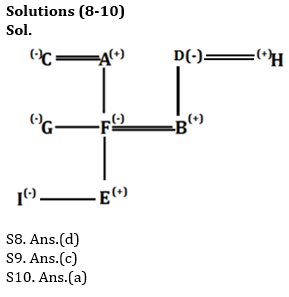 S11. Ans.(e)
Sol. Any advertisement highlights only the desirable qualities of the product. So, I is implicit. The ‘X’ brand has advertised its product in newspaper A. This implies that a large section of people reads advertisements in newspapers and that news-paper A too has a side circulation. So, neither II nor III is implicit.

S12. Ans.(c)
Sol. It is mentioned that the apples are so cheap that they cannot be good. This means that the prices of good apples are never too low and that very cheap apples are never good. So, neither I nor III is implicit. Assumption II clearly follows from the statement that apples are of inferior quality because they are cheap. So, it is implicit.