Directions (1-5): Study the information carefully and answer the questions given below:
Eight persons sitting around a square table, in such a way four persons are sitting four corners while four sits at on each side. Some are facing inside, and some are facing outside the center. All of them was born in different years- 2017, 1995, 1982, 1965, 1958, 2004, 1987 and 1998 (Their age is considered as on the same month and day of 2020 as their date of births).
D sits third to the left of R whose age is a square of an odd number. R sits at one of the corners of table. Q is younger than C. A who is 33years old sit second to the right of D. P is 17years younger than S who sits second to the right of Q. P is not the second youngest person and sits third to the right of C who is facing same direction of D but opposite to P. The one who is 55 years old sits third to the right of the one who is third youngest person of the group. D is younger than R but older than C. S is not an immediate neighbour of D. A is facing opposite direction to B who is facing same direction as youngest person. The third oldest person facing inside. P and S face same direction. S sits one of the corners.

Q6. Statement: Prime Minister Narendra Modi launched three mega flagship schemes aimed at transforming Urban India, including the much talked about Smart Cities proposal, with a whopping Rs. 4 lakh crore kitty having been lined up for the projects. He also unveiled logo of the housing mission, which has his personal touch in the finalization of its design.
Speaking at the event, Modi said, “the decision to make cities smart will be taken not by governments but by the people of the city, the local administration. Let there be competition between cities in development so that smart cities come up.”
Which of the following will be an effect of the initiative taken by the government?
(a) Ensuring water supply to each household, sewer connections, sanitation and solid waste management in rural and urban governance would be the focus under the scheme.
(b) Quality of life will improve in rural and urban areas.
(c) Provision of roads and public transportation beside the implementation of reforms in urban governance would be the focus under the scheme.
(d) Millions of jobs will be created and scarcity of houses will be removed in urban and rural areas.
(e) All of the above.

Q7. Statement: By fixing a deadline of one year from the date of framing of charges for the completion of a trial involving the members of parliament and legislative assemblies, the Supreme Court has once again intervened effectively to give some credibility to the idea of cleaning the polity. It gave a jolt to the political class by striking down a provision that protected sitting legislators from immediate disqualification on conviction.
Which of the following can be concluded from the above passage?
(a) To implement the guidelines, the government must set up more speedy trial courts, which will help them deliver justice in time.
(b) The steps taken by the apex court will help to choose the best people from their constituency and make the Indian democratic system free from criminalization.
(c) This will help in reducing the scourge of criminalization of politics.
(d) The latest order will help in addressing this problem by empowering the trial court to refuse routine adjournments.
(e) None of these

Direction (8-10): Study the following information carefully and answer the given questions:
A, B, C, D, E and F are six family members. There are three generations in a family and only three female members in a family. E is daughter in law of F, who has only one daughter. B is the mother of D. B is not from the second generation. A is the grandchild of F. C is a female but is not the mother of A. F is married to B. 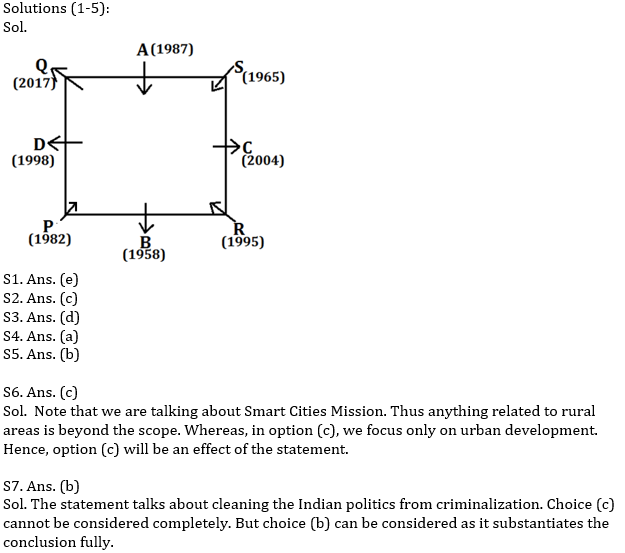 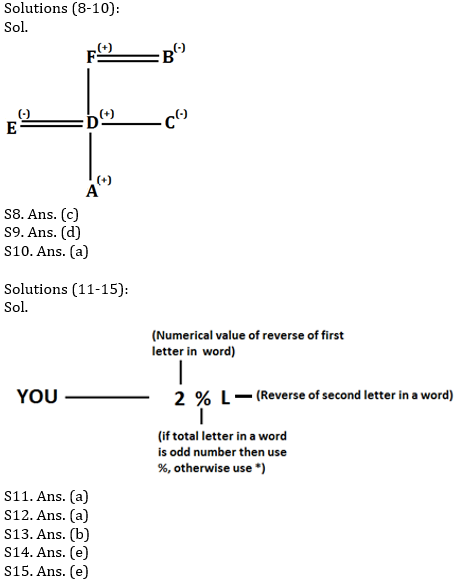