Directions (1-5): Study the information and answer the given questions:
Eight persons- J, K, L, M, N, O, P and Q are sitting around a circular table. Some of them are facing inside the center while some are facing outside the center. L sits third to the right of O who is facing inside the center. K sits 2nd to the right of L. K sits third to the left of Q. J sits second to the left of L. Both P and M sits immediate left to each other. Only two persons sit between J and N. K faces same direction as M but opposite to Q. P sits second to the left of J. P and N facing same direction but opposite to L.

Q3. How many persons sits between L and O when counted in clockwise direction with respect to O?
(a) One
(b) Three
(c) Two
(d) Four
(e) No one

Q7. If all the letters in the word OPPORTUNITY are arranged in alphabetical order from left to right in such a way that vowels are arranged first followed by consonants, then how many letters are there in between I and R after the arrangement?
(a) None
(b) Two
(c) More than Five
(d) Five
(e) Four

Q11.Pointing to a Lady, A Man said, “She is the maternal aunt of my father’s only daughter” How is the daughter of Man’s father is related to Man?
(a) Herself
(b) Sister
(c) Daughter
(d) Either (a) or (b)
(e) Father

Q12. Himani says pointing towards a Girl, “She is the daughter of the wife of my brother”. In this relation, Himani is a female then how Himani is related to the girl?
(a) Aunt
(b) Father
(c) Uncle
(d) Grandfather
(e) None of these 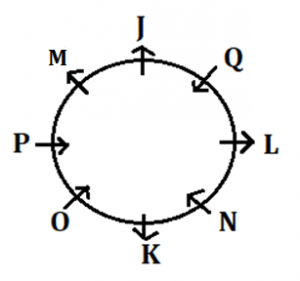